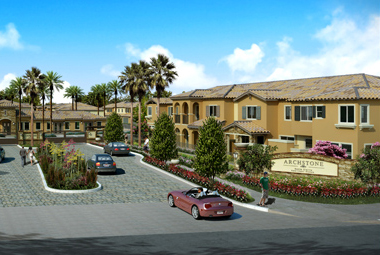 SANTA CLARITA, CA - Archstone, a leader in apartment investment and operations, today announced that it has begun construction on a brand-new rental townhome development in Santa Clarita in a joint venture with Resmark Apartment Living, a division of The Resmark Companies, a full-service real estate investment advisor.

A groundbreaking ceremony was held on site today to unveil the plans for the 157-unit townhome community located at the corner of Lost Canyon Rd. and Via Princessa on the 12.49 acre site. The site is situated within a short commute of major employment centers in the San Fernando Valley and the greater Los Angeles Area. Archstone expects first units to be available in spring 2013.

“We are excited to partner with Resmark, a well-respected organization, to begin the development of another high-quality community in our largest market – Southern California,” said Neil Brown, Archstone’s chief development officer. “As one of the largest owners and operators in the market, we believe Archstone Santa Clarita will be an excellent addition to the 55 communities and 18,570 units we already own and/or operate there.”

Ziv Cohen, Chief Operating Officer at Resmark Apartment Living, added: “Resmark is pleased to partner with a developer as highly regarded as Archstone on this unique community, which will be an attractive addition to the Santa Clarita market. We look forward to working with Archstone in creating what we believe will become one of the area’s premier apartment destinations.”

Archstone Santa Clarita offers direct access to State Route 14, which connects to Interstate 5, for a short commute to Los Angeles. Within a mile of the community is the Via Princessa Metrolink Station, which provides service to the San Fernando Valley and Union Station in downtown Los Angeles.

In addition to its proximity to the greater Los Angeles area, Archstone Santa Clarita will offer easy access to one of the strongest job markets in Los Angeles County, the Santa Clarita Valley. The area is home to professional employers in film production, aerospace, manufacturing, biomedical research and high tech.

“The strong job market in the Valley and in the Los Angeles area has helped create greater demand for quality rental housing in Santa Clarita,” said Richard E. Lamprecht, Archstone’s executive vice president of development for the West Region. “We expect Archstone Santa Clarita to be perfectly positioned to capture that demand because of its access to commuter-friendly transportation options and the many thriving employers in the city.”

The community will also be within a short drive of popular shopping options at the recently developed Plaza Country at Golden Valley shopping center, which features Target, Kohl’s, Lowe’s, Staples and Bed Bath & Beyond. It is also within two miles of Ralphs, Albertsons, Stater Bros. and Costco, in addition to numerous restaurants and local shops.

While at home, residents will have access to a number of unique amenities, including a resort-style pool, spa and Yoga lawn. Also available to residents will be a club lounge, business center, fitness room, barbecue area and playgrounds.

Archstone is a recognized leader in apartment investment and operations. The company's portfolio is concentrated in many of the most desirable neighborhoods in and around Washington, D.C., Los Angeles, San Diego, San Francisco, New York, Seattle and Boston. Archstone strives to provide great apartment rentals and great service to its customers—backed by service guarantees. As of December 31, 2011, the company owned or had an ownership position in 432 communities located in the United States and Europe, representing 72,996 units, including units under construction.