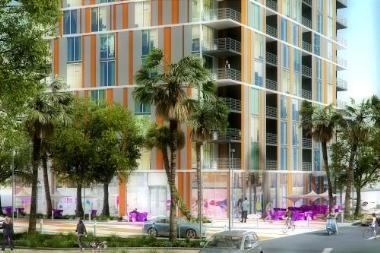 MIAMI, FL - Armed with a land bank of 12 carefully selected sites, new financing techniques and a clean balance sheet, The Related Group reports ground breaking has occurred at downtown’s MYBRICKELL, and at Broward’s Apogee Beach, vertical construction is underway and predicted to top off in seven months. Both properties are 100% under contract and ahead of schedule.

As the only developer with enough assets, expertise and vision to move South Florida’s residential culture forward with new construction, Related’s “tip-toe” approach sets new guidelines for success in a post-housing crash market, ensuring demand and financials are met before launching or breaking ground on new inventory.

The finance program developed from expertise with the Latin American market requires that, by closing, 80 percent of the sales price is paid in full by buyers.

Boasting success from the developer’s first two projects announced in 2011, Apogee Beach in Hallandale Beach and MYBRICKELL in downtown Miami marked the first groundbreakings in their respective regions since 2006.

MYBRICKELL’s success also showcases the fastest reservation to contract conversion rate ever, in four months. Related’s conservative approach for downtown development calls for 192 units to sell out, whereas the market previously introduced 5,000 units at once.

Continuing the rollout of high performance properties in response to the demands and desires of a new generation, 1100 Millecento Residences is next for Related. Since launching in Argentina, during luxury antique car race Rally de las Bodegas where The Related Group was title sponsor, the developer reports 60 reservations out of 382 residences.

The 42-story tower will feature residences starting from $220,000, with 50% financing by Related, and boast sleek interiors by famed Italian design firm Pininfarina—the legend behind Ferrari, Maserati and Rolls-Royce designs.