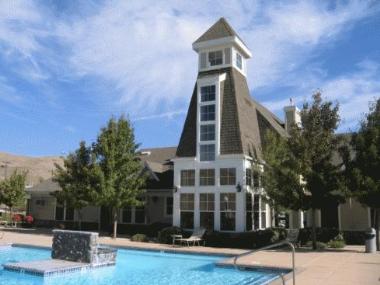 Mark Gleiberman, President of MGPG, called Manzanita Gate, "a desirable secondary market opportunity that leverages our Northern California operations platform, allowing us to add value through both asset and operational improvements while benefitting from a strengthening Reno apartment market. After more than a year of REO operations, the community was not keeping up with collections growth evidenced at other properties in the Northwest Reno submarket."

Manzanita Gate is located in the foothills of Northwest Reno, a low-density suburban submarket predominately built out in the late 1980s through the 1990s. "We are wary of high-turnover commodity apartments in secondary markets where residents have a history of concession shopping," said Lane Jorgensen, MGPG Investments Manager. "Manzanita Gate immediately stood out to us as a destination property in Reno, uniquely situated within walking distance of a desirable elementary school and high school as well as large public parks and a public library. Particularly for families in transition between home ownership, people undergoing life changes or those new to Reno, Manzanita Gate offers a comfortable home with a fantastic quality of life as they settle in to the community. Everything a family needs on a daily basis including schools, a wide variety of shopping, restaurants and outdoor recreation space is on the short drive home from work. Singles and couples also will be attracted to the amenities and suburban nature of the community, especially those that want to be on the west side of town closer to the north side of Lake Tahoe. By operating Manzanita Gate as a destination property, we will be able to reduce turnover, hold occupancies high and allow our staff to really focus on serving our residents."

The acquisition was financed with a $21.6-million fixed-rate loan from Fannie Mae arranged by Rob Prouty at Key Bank Real Estate Capital. The property offers a mix of one- and two-bedroom apartment homes that average 940 square feet. Each apartment has a washer and dryer. MGPG plans to complete minor interior upgrades, update the common areas and remedy deferred maintenance issues, particularly the roofs and windows, to improve resident quality of life.

Since December 2010, MGPG has completed seven apartment acquisitions totaling 1,648 units at a value of more than $215 million. MGPG anticipates closing an additional $200 million in acquisitions within the next 12 months.