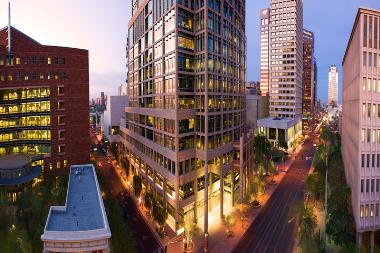 MEMPHIS, TN - EdR, one of the nation’s largest developers, owners and managers of collegiate housing, has executed agreements with Concord Eastridge to develop, own and manage a $52 million mixed-use collegiate housing community adjacent to the Phoenix Biomedical Campus, which includes the University of Arizona School of Medicine, and three blocks from the Arizona State University downtown campus in Phoenix, AZ.

EdR will be the majority owner and will manage the community upon its summer 2013 completion. Concord Eastridge is developing and constructing the housing, which will be owned jointly by the two companies. Construction is expected to commence next week.

The urban-design, mid-rise development will include 609 beds within 326 units in a variety of studios, one-, two-, three- and four-bedroom apartments. Each will include private bathrooms and bedrooms, a full kitchen and a washer and dryer and most apartments will be fully furnished. Amenities will include two clubhouses, tanning and fitness facilities, WiFi and Internet access, swimming pools, study lounges, computer labs and a five-story parking garage with more than 400 spaces. One of the residential buildings will offer 7,500 square feet of retail space at the street level.

“The City of Phoenix and the universities are making a strong investment in an aggressive plan to create a downtown campus,” said Tom Trubiana, chief investment officer and executive vice president of EdR. “We are excited to get in on the ground floor of this burgeoning downtown revitalization with our partner Concord Eastridge who has a solid reputation in our industry for developing successful projects.”

The Arizona State University (ASU) downtown campus includes the Walter Cronkite School of Journalism and Mass Communication and the College of Nursing & Healthcare Innovation. The new multimillion-dollar ASU downtown student recreation center is scheduled to open in May, 2013, and the ASU Sandra Day O’Connor College of Law is also planning to move to the downtown campus.

Located at Third Street and Roosevelt, the collegiate housing community is also adjacent to the University of Arizona Colleges of Medicine and Pharmacy which are on the Phoenix Biomedical Campus which includes the Arizona Biomedical Collaborative, a joint research venture of the University of Arizona and ASU. The Phoenix Biomedical Campus is also home of the Translational Genomics Research Institute (TGen) and the International Genomic Consortium. TGen will undergo a 150,000-square-foot expansion beginning in mid-2012. Planning has also begun for a 350,000-square-foot medical office building.

In 2010 ASU’s downtown campus and the Phoenix Biomedical campus combined enrollment exceeded 10,000. Considering the enrollment growth the downtown campus has experienced every year since its 2006 opening, its student population is expected to reach 16,000 by 2020.

The City of Phoenix continues to support the growing Biomedical Campus. Construction is scheduled to begin in April on a parking structure. In addition, the $150 million Arizona Cancer Center— expected to serve approximately 200,000 patients annually— is set to begin construction in August.

As reported in a recent study by Institutional Property Advisors, the occupancy for all multi-family housing in Phoenix increased 210 basis points to 92.4% and is forecast to increase another 60 basis points in 2012 to 93%.

“This bodes well for our development,” said Trubiana. “Our underwriting for this development assumes an initial fall 2013 occupancy of 91% which we believe is very achievable.”

Scottsdale-based Concord Eastridge is a national real estate development firm focused on public/private and mixed-use real estate development in association with universities and colleges, municipalities, public entities, not-for-profit organizations and other institutions. A privately held firm, Concord Eastridge has completed more than $190 million in ground-up development in the last 12 months. The company has offices in Scottsdale, Az., Arlington, Va., and Orlando, Fla.

EdR (NYSE:EDR) is one of America's largest owners, developers and managers of collegiate housing. A self-administered and self-managed real estate investment trust, EdR owns or manages 60 communities in 23 states with more than 34,000 beds within more than 11,000 units.