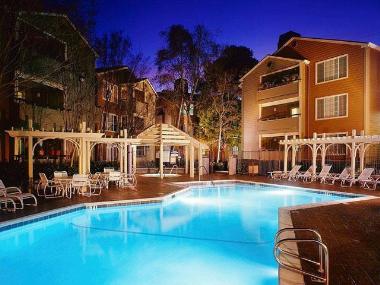 SUNNYVALE, CA - Archstone, a leader in apartment investment and operations, announced the acquisition by an Archstone-sponsored partnership of Parkside Apartment Homes, a 192-unit community in the heart of Silicon Valley. The community was purchased for approximately $63.2 million and will be renamed Archstone Sunnyvale.

Archstone Sunnyvale is located at the corner of North Wolfe Road and Stewart Drive in a Sunnyvale neighborhood not far from many of the most well-known technology companies in the world.

“We are committed to improving our portfolio of apartment communities in all of our core markets with each and every property we purchase,” said R. Scot Sellers, Archstone’s chief executive officer. “Archstone Sunnyvale is in the heart of one of the most exciting employment centers in the world and a fantastic addition to our many well-located Bay Area apartment communities.”

The corporate headquarters for Apple, Google, Cisco and Intel are all within five miles of Archstone Sunnyvale. Other major employers within a short drive of the community include Lockheed Martin, Yahoo, eBay, Netflix, Hewlett Packard and Adobe Systems.

Archstone Sunnyvale residents who commute to work outside of Silicon Valley are within two miles of the Sunnyvale Caltrain station and have easy access to interstates 280 and 880, state routes 85 and 17 and US highway 101.

In addition, the Sunnyvale apartments are surrounded by a number of high-end retail and entertainment centers. Vallco Square Mall, which features Macy’s and JCPenney, and the Westfield Valley Fair Mall, which is home to Nordstrom and Tiffany, are both within a few miles of Archstone Sunnyvale. Also nearby is Santana Row, an outdoor retail town center featuring luxury retailers like Gucci, Cole Haan and Urban Outfitters.

“Sunnyvale is one of the most desirable places to live in the Bay Area and demand for upscale apartment housing is increasing,” said Charles E. Mueller, Archstone’s chief operating officer. “We are excited about this opportunity to add even more value to the living experience of residents and the neighborhood through our commitment to being the best operators in the industry.”

With the addition of Archstone Sunnyvale, Archstone has an ownership position in 23 apartment communities, including more than 8,270 apartment homes, in the San Francisco Bay Area.

The transaction was brokered by Phil Salimbeni and Stan Jones of Marcus & Millichap of Palo Alto, Calif.

Archstone is a recognized leader in apartment investment and operations. The company's portfolio is concentrated in many of the most desirable neighborhoods in and around Washington, D.C., Los Angeles, San Diego, San Francisco, New York, Seattle and Boston. Archstone strives to provide great apartment rentals and great service to its customers -- backed by service guarantees. As of December 31, 2011, the company owned or had an ownership position in 432 communities located in the United States and Europe, representing 72,996 units, including units under construction.