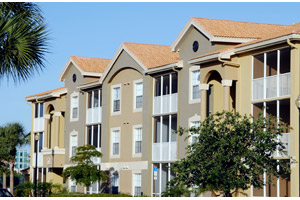 DALLAS, TX - Behringer Harvard announced that it has completed the sale of The Palms of Monterrey, a 408-unit, resort-style multifamily community situated on a 28-acre site in Fort Myers, which is on Florida's southwest coast in Lee County, approximately 100 miles south of Tampa. The buyer was Newton, Massachusetts-based Churchill Forge Properties, Inc., an owner and operator of more than 10,000 units of multifamily housing.

"We have been pleased with the performance of The Palms of Monterrey in terms of its sustained occupancy and net operating income, which exceeded expectations," said Mr. Samuel A. Gillespie, Chief Operating Officer of Behringer Harvard Opportunity REIT II, Inc. "In addition to these property-level performance factors, heightened investor interest in the multifamily property sector has been compressing cap rates. These conditions combined to make this an opportune time for us to market The Palms of Monterrey and capture an attractive 28 percent return on our investment.*"

Behringer Harvard acquired a fee simple interest in The Palms of Monterrey in May 2010 through a joint venture between Behringer Harvard Opportunity REIT II, Inc., a public non-listed real estate investment trust, and a partnership formed by DeBartolo Development and Christian Tyler Properties, LLC. Before May 2010, the joint venture held an interest in a promissory note secured by The Palms of Monterrey that was acquired in October 2009 from the Federal Deposit Insurance Corporation, which was acting as receiver for Corus Bank.

"The Palms of Monterrey is an excellent example of our investment strategy at work, from acquisition to disposition," said Mr. Edward Kobel, President and Chief Operating Officer of DeBartolo Development. "We acquired The Palms of Monterrey during a time when the capital markets had frozen and financing wasn't available. Anticipating a decline in single-family housing demand resulting from the foreclosure crisis, we saw this as an exceptional opportunity to buy a first-class multifamily asset at a significant discount. We successfully added value by leveraging our core competencies and ultimately benefiting from rising demand for apartments and the property's excellent location."

Constructed in 2001 at 15250 Sonoma Drive, the gated community consists of 17 three-story residential buildings, a clubhouse with a business center, a fitness center with a racquetball facility, a lighted tennis court, a playground, two heated pools and a poolside hot tub. Units feature one, two or three bedrooms and range in size from 1,008 to 1,496 square feet.

The Palms of Monterrey is less than a mile from HealthPark Medical Center, an area employment center that includes a 270-bed acute care facility and the only comprehensive children's health care center between Tampa and Miami. Residents are only minutes from Fort Myers Beach and the Sanibel and Captiva islands, as well as many hospitality-industry employers.