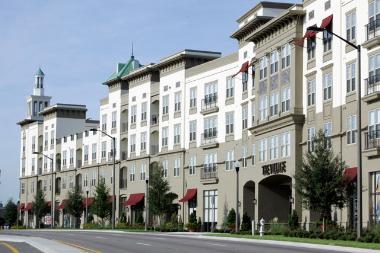 HOUSTON, TX - The Morgan Group, a leader in upscale multifamily development, construction and property management, has arranged financing of $146 million on behalf of its affiliated investment partnerships. The proceeds were obtained from bank, agency and insurance company loans with terms ranging from five to ten years, collateralized by five apartment properties in Texas, Florida and North Carolina.

These properties include: 2222 Smith Apartments and 33Thirty-Three Weslayan Apartments in Houston, financed by BBVA Compass Bank and Northwestern Mutual Life; The Village at Lake Lily in Maitland, Florida, and Arelia James Island Apartments, in Jacksonville, Florida, which were financed by FNMA and Metropolitan Life; and Spectrum South End Apartments in Charlotte, North Carolina, financed by New York Life.

“Current loan rates for multifamily projects were extremely attractive," said Chairman and CEO Mike Morgan. "It appeared to be a good time to lock in terms for stable, core assets. The five apartment properties we refinanced represent more than 1,700 units in our portfolio."

The Morgan Group, Inc. is a privately held national developer of Class A multifamily properties with headquarters in Houston, Texas. Founded in 1959, Morgan also specializes in upscale urban construction and property management. Since 1988, The Morgan Group has developed more than 15,000 units at a cost of more than $1.5 billion. More than 1,000 units are in the planning or construction stages in Texas and Florida.