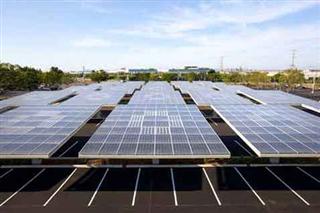 The multi-site solar project was made possible through a power purchase agreement between SunEdison and Southwestern Public Service Company which was previously announced in September. Wells Fargo provided the construction and permanent equity financing, which marked the company’s largest renewable energy construction loan to date. Since 2006, Wells Fargo has invested more than $2.7 billion in renewable energy projects.

The energy generated from the solar farms is sold to Southwestern Public Service Co., a subsidiary of Xcel Energy, Inc., supporting the utility’s compliance with New Mexico's renewable portfolio standard. The solar farms are expected to produce more than 1.9 million megawatt-hours of electricity over the next 20 years, enough to power over 8,000 average U.S. homes per year, while the environmental attributes associated with the solar farms are expected to offset more than 2.9 billion pounds of carbon dioxide emissions over the next 20 years.

Wells Fargo & Company (NYSE:WFC) is a nationwide, diversified, community-based financial services company with $1.3 trillion in assets. Founded in 1852 and headquartered in San Francisco, Wells Fargo provides banking, insurance, investments, mortgage, and consumer and commercial finance through more than 9,000 stores, 12,000 ATMs, the Internet (wellsfargo.com and wachovia.com), and other distribution channels across North America and internationally. With more than 270,000 team members, Wells Fargo serves one in three households in America. Wells Fargo & Company was ranked No. 23 on Fortune’s 2011 rankings of America’s largest corporations. Wells Fargo’s vision is to satisfy all our customers’ financial needs and help them succeed financially.