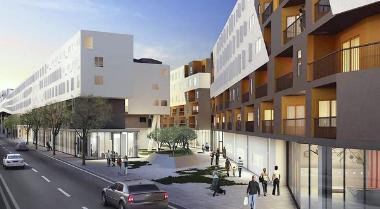 LOS ANGELES, CA - Canyon-Johnson Urban Fund (CJUF) has provided preferred equity capital to a joint venture among The McGregor Company, Polis Builders Ltd. and Goldman Sachs Urban Investment Group (UIG) to jumpstart the development of One Santa Fe, a $160 million mixed-use project, with the City of Los Angeles as the sponsoring agency, in the heart of Downtown Los Angeles’s Arts District. The financing will enable the One Santa Fe development team to begin construction and site improvements this month.

The fully entitled and permitted project, situated on land owned by the Metropolitan Transportation Authority (MTA), spans several blocks on Santa Fe Avenue between First and Fourth Streets. When complete, One Santa Fe will include 438 apartments and 78,620 square feet of office and retail space, along with nearly 50,000 square feet of public outdoor space.

One Santa Fe is leased under a 78-year ground lease with the MTA, which is currently considering a potential future direct connection from the property to a new terminal station for the Red Line Subway. It is anticipated that the MTA will sublease 35,000 square feet of the project’s commercial space, and that the balance of the space will be leased to community-serving retail tenants. The project is also located across the street from the Southern California Institute of Architecture, and the development has been designed in part to offset needs for student housing in the area.

“One Santa Fe is truly transformative for Los Angeles. It’s time to move this valuable development forward,” said CJUF Managing Partner Bobby Turner. “The project will help meet the substantial demand for affordable and market-rate housing and create a new focal point for the neighborhood by bringing public transportation and new life to a piece of land that has sat underutilized for too long.”

“Canyon-Johnson is all about creating opportunities in urban America,” said CJUF Partner Earvin “Magic” Johnson. “It’s great to invest in our home base of Los Angeles, and to take a project as important as One Santa Fe to the next level,” he added.

Designed by famed Los Angeles architect Michael Maltzan, the six-story building is currently planned to feature an outdoor terrace that provides views of downtown and the river, along with a grocery store, additional retail, an art gallery, a multi-use theater and a garden on the ground floor. Twenty percent of the units will be affordable and aimed at low-income renters. The owners of the commercial and residential components are each Equal Opportunity Affirmative Action Employers.

“This is a significant economic development win for the city,” said Los Angeles Mayor Antonio Villaraigosa. “This is a prime example of our ability to attract investment, create jobs and enhance parts of the city in need of revitalization.”

“Canyon-Johnson is pleased to invest in One Santa Fe and work with a development team led by Bill McGregor, whose leadership and perseverance enabled this project to come to fruition,” said CJUF Managing Director Quincy Allen. “The project’s complex financing and our work with the City of Los Angeles and the MTA are a testament to the fact that public-private partnerships play a strong role in urban development. We look forward to making this project a reality.”

“We are thrilled to close this transaction. From the beginning, we’ve believed One Santa Fe will help invigorate Downtown Los Angeles and jumpstart additional investment in the up-and-coming Arts District,” said Bill McGregor, President of the McGregor Company. “I thank our many partners – Canyon Johnson Urban Fund, the City of Los Angeles, the Metropolitan Transportation Authority, Goldman Sachs, the Department of Housing and Urban Development and everyone else who contributed to bringing this project from the drawing board to reality,” he added.

“We are very proud to be involved in One Santa Fe as it serves as a model for mixed-income and transit-oriented development in emerging urban markets,” said Alicia Glen, Managing Director and Head of the Urban Investment Group at Goldman Sachs. “This project was conceived over five years ago and has at last become a reality thanks to the long-standing commitment and determination of a strong group of public and private partners who were dedicated to revitalizing the Arts District with this significant mixed-use project.”

“The One Santa Fe development is a prime example of a partnership that supports positive economic development in Los Angeles,” said Los Angeles City Councilmember Jan Perry, the representative of the area. “This is a game-changing project that will have a lasting positive impact on both the Arts District and all of Downtown,” she said.

Locally based KTGY Group, Inc. is the executive architect for the project. KTGY has already completed construction drawings and the general contractor, Bernards Brothers Inc., has commenced predevelopment work onsite. The project is anticipated to be fully constructed by December 2014.

The Canyon-Johnson Urban Fund is one of the country’s largest private real estate funds focused on the development of urban properties in underserved neighborhoods. Canyon Capital Realty Advisors and Earvin “Magic” Johnson’s Magic Johnson Enterprises joined forces to raise a series of funds to identify, enhance and capture value through the development and redevelopment of real estate in densely populated, ethnically diverse urban communities. Fundamental to Canyon-Johnson’s investment thesis is its commitment to a “triple bottom line” philosophy of achieving superior financial results, fostering opportunities within urban communities, and embracing environmental responsibility. With nearly $2 billion in committed equity capital, the funds are positioned to facilitate more than $8 billion in development and revitalization in major U.S. metropolitan areas.