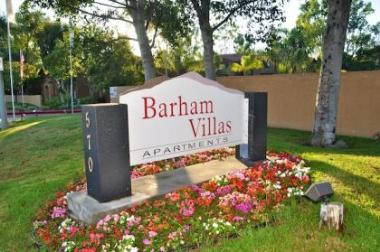 Mark Gleiberman, President of MGPG, called Barham Villas, "an exceptional opportunity, allowing us to add value through both asset and operational improvements while benefitting from the extremely strong market fundamentals in San Marcos. We are especially pleased to bring this community back under local ownership and management."

Barham Villas is located in the university district of San Marcos, a prosperous and developing North San Diego County community that is home to the growing California State University San Marcos campus. "This location will benefit from the continued expansion of CSUSM, Barham Drive access to the new Palomar Hospital, and easy access on the Sprinter commuter rail, 78 freeway and Twin Oaks Valley Road to major North County and I-15 corridor job bases," said Lane Jorgensen, MGPG Investments Manager. "Of the many great markets in San Diego County in which to invest in apartments, no other has received as much major new public investment as this pocket of North County has in the last few years, investment that is enhancing the local private sector employment outlook. This location is central to medical, higher education, technology and R&D economic drivers that will create demand for housing across the price spectrum."

The acquisition was financed with a $21.36-million fixed-rate loan from Freddie Mac arranged by Andrew Behrens at CB Richard Ellis Capital Markets. The property offers a mix of one-, two-, and three-bedroom apartments. Each apartment has a large one-car garage. The kitchens and baths were remodeled by the previous owner. MGPG plans to complete additional interior upgrades, renovate the common areas to contemporary standards and remedy deferred maintenance issues to improve resident quality of life.

Since December of 2010, MGPG has participated in nine apartment transactions on the West Coast encompassing 2,081 units at a total value of $267 million. Six of these deals were acquisitions totaling 1,526 units at a value of $188 million. MGPG anticipates closing an additional $200 million in acquisitions within the next 12 months.