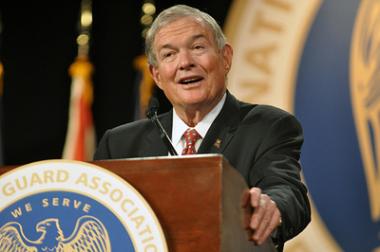 Presenting the award to Senator Bond, Eileen Fitzgerald, NeighborWorks America CEO noted that he is known for a long string of accomplishments on behalf of families and accessible housing, beginning with his service as Missouri's youngest governor and continuing through four terms as one of Missouri's U.S. Senators.

"Senator Bond has been a leader for families and housing," said Fitzgerald. "He continues that leadership as a co-chair of the Bipartisan Policy Center's Housing Commission. We are excited and ourselves sincerely honored to recognize Senator Bond for all the work that he's done and continues to do for housing in the United States."

In the 1990s, Senator Bond fought to rid cities of dilapidated public housing projects, which forced residents to live in substandard housing, housing projects that had become breeding grounds for crime and drug abuse. His efforts, along with colleagues in the Senate passed the National Affordable Housing Act of 1990, which fostered the creation of new affordable homes and the innovative use of housing vouchers and the eventual creation of the Hope VI program.

Senators Bond's work for housing continued and bore additional fruit with the Homeless Emergency Assistance and Rapid Transition to Housing Act (HEARTH), which built upon research showing that providing permanent supportive housing is a more effective way to fight homelessness than providing only emergency shelter programs.

The HEARTH Act was approved by the Senate as part of the Helping Families Save their Homes Act, and signed by the President in May of 2009.

Senator Bond's work for housing included a focus on veterans. The Senator fought to improve and streamline the VA since he chaired the Senate Appropriations subcommittee that funded the agency, pointed out ongoing problems in meeting homeless veterans' needs.  Most recently, he secured language in the 2010 spending bill for the VA instructing them to work better with homeless providers and not obstruct their efforts to serve homeless veterans.

Along with Senator Patty Murray (WA), Senator Bond secured $75 million in federal funds to start a new partnership between HUD and the VA to help homeless veterans in the fiscal years 2008 Transportation-Housing spending bill.

The program, known as the Veterans Affairs Supportive Housing program, or HUD-VASH, combines rental housing assistance with case management and clinical services to assist homeless veterans.  Veterans use Section 8 rental assistance and the supportive services they need to be integrated back into their communities and former lives.

And like so much of his work for housing, Senator Bond's support for the creation of a program to fight foreclosure continues and is successful. He was instrumental in helping to secure funding that led to the creation of the National Foreclosure Mitigation Counseling program. This program has helped more than one million homeowners receive important counseling that clearly outlines their options to prevent foreclosure.

NeighborWorks® America creates opportunities for people to improve their lives and strengthen their communities by providing access to homeownership and to safe and affordable rental housing. In the last five years, NeighborWorks organizations have generated more than $19.5 billion in reinvestment in these communities. NeighborWorks America is the nation's leading trainer of community development and affordable housing professionals.