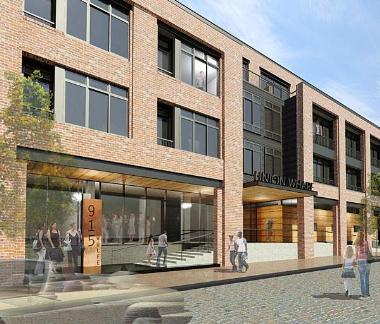 "Mayor Stephanie Rawlings-Blake last week at her inauguration voiced a vision of growth for Baltimore City," said Tom Bozzuto, CEO of The Bozzuto Group.  "Through the start of Union Wharf, we are proud to be doing our part in creating residences that will attract people to our city and provide some of that growth."

"The Union Wharf development project is a prime example of Class A urban infill multifamily development," said Penny Pritzker, CEO of Chicago-based Pritzker Realty Group. "We very much look forward to working with The Bozzuto Group and CIGNA to create a dynamic new community for the Fells Point neighborhood."

Located on the eastern edge of the Fells Point peninsula on an undeveloped site overlooking the Inner Harbor, Union Wharf has been accepted into Maryland's Voluntary Cleanup Program and is being built to achieve LEED Gold certification from the U.S. Green Building Council.

The project is being financed in part through a partnership between Bozzuto, CIGNA and Pritzker Realty Group, a Chicago-based real estate investment company, and a construction loan from PNC Real Estate.

Headquartered in the Washington, D.C. area, The Bozzuto Group is a diversified residential real estate company consisting of six integrated companies – Acquisitions, Construction, Development, Homebuilding, Land Development and Property Management – that together provide a broad range of real estate services throughout the Mid-Atlantic and Northeast.  The company is committed to providing quality housing for individuals of all income levels, producing everything from luxury homes and apartments to affordable housing solutions.

Throughout The Bozzuto Group's more than 23-year history, the company has developed, acquired and built more than 35,000 homes and apartments, and the firm and its principals have been honored with numerous industry awards and accolades, including having been recognized by the NAHB as the nation's premier apartment development company, and twice as management company of the year.