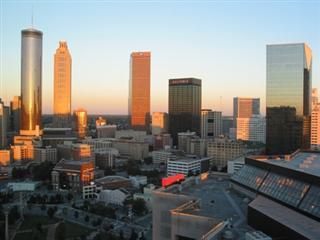 The goal of the Atlanta BBC is to reduce energy and water consumption by at least 20 percent in participating buildings across Atlanta by 2020, with a primary focus on the city’s Downtown central business district. Through substantive energy and water efficiency (collectively “EE”) upgrades of municipal, university, hospital, and commercial buildings, the Atlanta BBC intends to free up business capital for more productive uses, stimulate growth for communities, foster new business opportunities, and create more sustainable footprints.

Downtown commercial property owners who have already signed on to the Challenge include: AmericasMart Atlanta, Epsten Group, the Georgia Dome, the Georgia World Congress Center and the General Services Administration’s Peachtree Summit Building. The flagship project of the Atlanta BBC is the Atlanta Civic Center, which will reap an estimated $228,000 return on investment each year after energy efficiency upgrades have been completed.

The Atlanta BBC is a part of the City’s Power to Change, an effort aimed at making Atlanta more sustainable by improving “green” programs and policies such as water and energy conservation, reducing solid waste and carbon emissions, and improving recycling rates.

A growing public-private partnership has been formed to execute the projects and achieve the goals of the Atlanta BBC. Founding partners include companies as large as Georgia Power and public entities including the Department of Energy and General Service Administration.