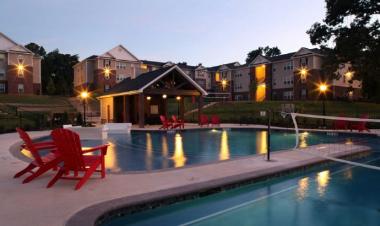 CHARLOTTE, NC - Campus Crest Communities, Inc., a leading developer, builder, owner and manager of high-quality, purpose-built student housing under The Grove® brand, announced the complete list of development projects for delivery in the 2012/2013 academic year. Including the two wholly-owned projects the Company previously announced, Campus Crest is scheduled to deliver a total of six new projects – three wholly-owned and three joint venture – for the 2012/2013 academic year.

Campus Crest Co-Chairman and Chief Executive Officer Ted Rollins noted, “I am pleased to announce the remaining four projects scheduled for delivery in the 2012/2013 academic year. All six projects are the culmination of hard work by our team members, diligent underwriting and the synergies resulting from the Company’s vertically integrated platform. Having built all 33 properties in our portfolio over the past seven years, we continue to refine and improve our development, construction, leasing and management processes. The new developments have a higher average bed count than the operating portfolio average, and are located on average about 0.4 miles to campus in markets with very compelling supply/demand characteristics. These exciting new projects underscore our promise to provide market-leading product and services to our residents that will enhance the communities we serve, while we seek to create long-term value for our shareholders.”

The three wholly-owned communities for the 2012/2013 academic year have a total expected construction cost of $84.7 million. This includes the previously announced, wholly-owned projects at Auburn University and the University of Maine, which have broken ground and are scheduled for delivery in the third quarter of 2012. The three joint venture projects will be developed in partnership with Harrison Street Real Estate Capital (“HSRE”) for $72.1 million; the Company owns a 10.0% interest in these communities. Expected yields on the six projects are in a range of 7.5% to 8.0%.

Select highlights for the projects include:

Campus Crest Communities, Inc. (NYSE: CCG) is a leading developer, builder, owner and manager of high-quality, purpose-built student housing properties located in targeted U.S. markets. The Company is a self-managed, self-administered and vertically-integrated real estate investment trust which operates all of its properties under The Grove® brand. Campus Crest Communities owns interests in 33 student housing properties containing approximately 6,324 apartment units and 17,064 beds. Since its inception, the Company has focused on customer service, privacy, on-site amenities and other lifestyle considerations to provide college students with a higher standard of living.