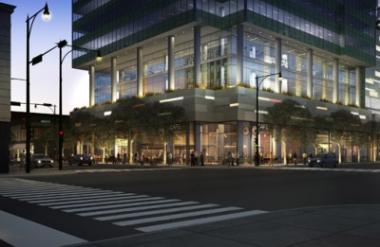 CHICAGO, IL - Canyon-Johnson Urban Funds (CJUF) has teamed with Harper Court Partners, LLC, a joint venture between Vermilion Development, Inc. and JFJ Development, on the redevelopment of Harper Court in the Hyde Park neighborhood of Chicago. The mixed-use project represents over $106 million of investment in the local area and collaboration between several public and private entities that provided equity, land and financing to bring a mix of commercial office, retail, residential and hospitality uses to a 3.3 acre site at the corner of 53rd Street and South Lake Park Avenue.

The project will be constructed in two phases, beginning with a nine-story, 150,000 square-foot office tower that has been leased to the University of Chicago. This lease is one of the largest to be signed in Chicago this year. The office tower will be integrated with structured parking and a three-story retail building anchored by LA Fitness. A Hyatt Place hotel will also be included in the project’s first phase. During the project build-out, the team will focus on leasing the remaining available ground-floor retail space to soft goods retailers, entertainment venues, as well as casual and fine dining restaurants.

The second phase will involve the construction of up to 425 residential units.

“We are thrilled to be back in the Chicago area on a project of such high quality,” said Canyon Managing Partner Bobby Turner. “Hyde Park is exactly the kind of community in which Canyon Johnson invests. It enjoys density and diversity, and its close proximity to the University of Chicago makes it an even more attractive location for CJUF investment.”

CJUF made its first investment in Chicago in 2003 when it acquired and redeveloped State Place, a mixed-use project with retail shops and condominium units located in the South Loop. In June 2011, Canyon acquired and announced plans to reposition the Roosevelt Collection, a transit-oriented mixed-use project also located in the South Loop neighborhood.

“We believe in Chicago and are thrilled about this opportunity to contribute to the ongoing revitalization of this neighborhood,” said Canyon Partner Earvin “Magic” Johnson. “The completion of Harper Court will bring new stores, restaurants and office space to an underserved area of the city, and create hundreds of construction and permanent jobs in the process.”

The build-out of Harper Court is projected to create 800 construction jobs, 350 permanent retail jobs, and 150 permanent hospitality jobs. Approximately 500 employees from the University of Chicago will work in the project’s office tower upon completion and over 28% of qualified project costs will be performed by minority and women-owned businesses.

“The Hyde Park neighborhood drew our interest because of its high barriers to entry and limited availability of retail space,” said Canyon Managing Director Rich Holly. “The combination of the preleased space to the University of Chicago and LA Fitness combined with the strong support of the University and City of Chicago makes Harper Court a particularly compelling investment opportunity for Canyon.”

Citi Community Capital, which specializes in community reinvestment projects, provided construction financing to the project team for the construction of Harper Court.

Located within walking distance to the University of Chicago and University of Chicago Hospitals, Harper Court is situated in a neighborhood populated by thousands of students and employees. The site is located near several local attractions including the Museum of Science and Industry, the Frank Lloyd Wright Robie House and Promontory Point, and also enjoys access to several major transportation lines. The nearby Metra train station and buses on the CTA routes #15 and #28 provide direct transportation to the Chicago Central Business District, just seven miles from the property.

The project’s General Contractor, James McHugh Construction Co., has begun to mobilize the Harper Court site. The project is anticipated to be complete in 2013.

The Canyon-Johnson Urban Funds (CJUF) are one of the country’s largest private real estate funds focused on the development of urban properties in underserved neighborhoods. A joint venture between Canyon Capital Realty Advisors and an entity of Earvin “Magic” Johnson’s Magic Johnson Enterprises, the funds were formed to identify, enhance and capture value through the development and redevelopment of real estate in densely populated, ethnically diverse urban communities. Fundamental to Canyon-Johnson’s investment thesis is its commitment to a “triple bottom line” philosophy of achieving superior financial results, fostering opportunities within urban communities, and embracing environmental responsibility. With nearly $2 billion in committed equity capital, the funds are positioned to facilitate more than $8 billion in development and revitalization in major U.S. metropolitan areas.