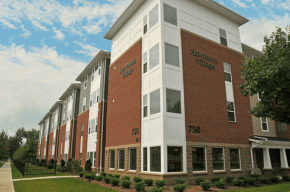 “Chase invests in projects like Hawthorn Village that provide attractive, affordable housing and strengthen Columbus neighborhoods,” said Jeff Greenleaf, central region manager for Chase Community Development Banking. “As the largest private employer in Columbus, we believe it’s important to keep the heart of our community a vibrant, appealing place where people want to work and live.”

NRP Principal, Alan F. Scott, agreed by saying, “We’re very proud of Hawthorn Village and Boulevard Homes and what we and our financial and development partners have been able to provide to the residents of Columbus. These properties are architecturally beautiful additions to the neighborhood and are destined to become an address of choice.”

Hawthorn Village – located at 750 W. Rich Street in Columbus – is a 54-unit senior affordable community for those 55 and better in a 4-story design with elevator and secured entrance. The property boasts brand new one and two-bedroom garden style apartments and represents a $9.5 million total development investment. Each apartment features a fully-equipped kitchen, spacious living areas and walk-in closets, along with an array of community amenities that include a resident fitness center, resident computer center, laundry facilities on each floor, free social services and resident activities, and more.

Boulevard Homes is comprised of 40 three- and four-bedroom rehabilitated and new construction single-family homes on the immediate west side of Columbus, located in the corridor surrounded by Route 315, Interstate 70, and W. Broad Street. Each features washer and dryer connection, window treatments, covered front porch, in unit security system, fully-equipped kitchen, full basement and detached garage with electric garage door opener. These homes carry a lease-to-purchase option whereas after 15 years, the resident has the option to buy the home at a reduced price.

The NRP Group is a full-service developer, general contractor, and property manager providing a broad range of services. From start to finish, every project The NRP Group takes on is carefully contemplated and executed to maximize investment return, cost efficiency, productivity and satisfaction. The NRP Group has been recognized as NAHB’s Multifamily Development Firm of the Year and has been ranked number one in the Top 50 Affordable Housing Developers for 2007, 2008, 2009 and 2010 by Affordable Housing Finance.

Since its’ founding in September 1995 by Alan F. Scott, T. Richard Bailey and J. David Heller, the company has experienced continual growth in the fields of single-family, multi-family, senior and student housing. In all, more than 15,365 housing units have been built with another 1,940+ planned in 2011.