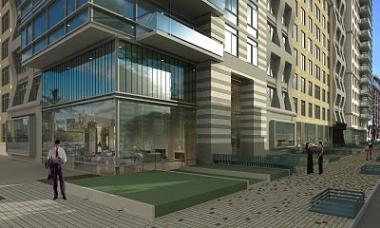 WASHINGTON, DC - Archstone, a leader in apartment investment and operations, announced today that it has acquired a 0.46-acre development site in the NoMa Business Improvement District in Washington, D.C. Archstone plans to build a 206-unit, well-appointed apartment community on the parcel located at 100 K Street NE. The site is two city blocks from Archstone NoMa, which is under construction at the corner of 1st Street NE and M Street NE and is on track to lease first units in the first quarter of 2012. Construction on the 100 K Street community is expected to begin in the second half of 2012.

“The Washington, D.C., metropolitan area is our largest market, and we’re excited about this opportunity to develop another apartment community in the District’s fastest growing neighborhood – NoMa,” said Neil Brown, Archstone’s chief development officer. “Including the 100 K Street site, we plan to begin construction on projects totaling $575 million in the D.C. area alone in the next two years.”

The 100 K Street site will be developed into Archstone’s 53rd apartment community in the Washington, D.C., metropolitan area, which is currently home to more than 17,500 apartment units owned and/or managed by Archstone. Like most of Archstone’s Washington DC apartments, the 100 K Street site is located within walking distance of major employers, public transportation stops and a number of popular retailers and restaurants.

Among the major employers within blocks of the site are the U.S. Securities and Exchange Commission, the U.S. Department of Justice, the U.S. Department of Education and XM Sirius Radio. The site is also within a few blocks of both the Union Station Metro Station to the south and the New York Avenue Metro Station to the north. And within a short walk from 100 K Street NE are the U.S. Capitol, the U.S. Supreme Court, the National Mall and the Library of Congress.

“This is an incredible location in NoMa, which continues to attract major public and private institutions that have added thousands of professional jobs to the area. That has created a significant amount of demand for apartment housing,” said Chaz Mueller, Archstone’s chief operating officer. “We’re excited to be an important long-term owner, operator and developer of high-quality apartment communities in NoMa and the entire Washington, D.C., metropolitan area.”

Archstone is a recognized leader in apartment investment and operations. The company's portfolio is concentrated in many of the most desirable neighborhoods in and around Washington, D.C., Los Angeles, San Diego, San Francisco, New York, Seattle and Boston. Archstone strives to provide great apartment rentals and great service to its customers—backed by service guarantees. As of June 30, 2011, the company owned or had an ownership position in 434 communities located in the United States and Europe, representing 77,084 units, including units under construction.