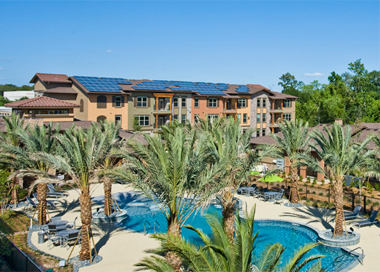 HOUSTON, TX - Cypresswood Estates, an affordable housing community for active adults, sets a new standard for green home builders. Named by the National Association of Home Builders as a finalist for the Multifamily Pillars of the Industry award, Cypresswood Estates stands out as the nation's first affordable housing for seniors that exceeds the criteria for Platinum LEED and Emerald Green certifications, the highest certifications available.

Cypresswood Estates benefits its residents with reduced utility bills and the peace of mind that comes with responsible, sustainable living. It also benefits the nation as proof that affordable housing can be built and maintained according to green design standards that are discussed frequently but executed rarely in low- and moderate-income housing. The Harris County (Texas) Housing Authority's achievement at Cypresswood Estates demonstrates to President Barack Obama, HUD Secretary Sean Donovan, and housing authorities across the country the feasibility of building to Platinum LEED standards without overburdening the budget.

"We weren't trying to be the highest-rated LEED property," said HCHA President and CEO Guy Rankin, "but building an environmentally sustainable property makes sense because LEED contributes to the quality, affordability and peace of mind we offer our seniors."

The HCHA designed Cypresswood Estates to maximize affordability for tenants, active adults 55 or older who are likely living on a fixed income. Residents can expect significantly lower utility bills as a result of energy-efficient construction and Energy Star appliances. Solar panels generate power to meet up to 60 percent of complex's projected energy needs; and several one- and two-bedroom units are designed for Net Zero energy usage, meaning they require no energy other than what is generated by the solar panels. Energy Star appliances in every unit include washers, dryers, dishwashers and refrigerators. Highly efficient HVAC systems, coupled with insulation materials such as Thermax and recycled cellulose, create the most energy-efficient units in Houston senior housing. Water usage is also greatly reduced: the units are equipped with low-flow plumbing fixtures, and a rainwater reclamation system channels rainfall from the roofs into storage tanks that supply drip irrigation for native, drought-tolerant landscaping.

Beyond its advantages to tenants, Cypresswood Estates also benefits the Houston community through environmentally aware building practices and the use of sustainable or recycled materials. Walking trails and sidewalk surfaces are made of recycled concrete. Green-certified kitchen cabinetry and wood products certified by the Forest Stewardship Council are used throughout. Additional practices that minimize environmental impact include the purchase of materials from within a 300-mile radius and the recycling of construction waste. Several bicycle storage facilities and electric car charging stations promote a lifestyle that's healthier for residents and for the environment.

All these features at the 88-unit Cypresswood Estates came at a cost that is only marginally higher (about 8 to 10 percent more per square foot) than a 90-unit community the HCHA built just months earlier. Rankin believes that the slightly higher cost is worth the long-term benefit that can be achieved if more housing authorities embrace green practices and materials in their multifamily and mixed-use communities. "What we've learned on this build breaks new ground on issues important to America's future," said Rankin. "Cypresswood Estates could serve as a road map for President Obama as he begins to put more emphasis on environmental stewardship, new energy alternatives and the development of green industries."

The Houston-based HCHA, led by Executive Director Guy Rankin, is a government nonprofit corporation utilizing innovative approaches and strategic partnerships to address the need for quality affordable housing. The HCHA staff's get-it-done approach to public housing needs and crisis housing solutions earned them the opportunity to carry out the Disaster Housing Assistance Program, a pilot program for housing the displaced after disaster. HCHA was recognized for its exemplary response during the Gulf Coast hurricane season in 2005, when the staff established a disaster housing center to place 11,000 evacuated families into transitional housing while their communities were being rebuilt. Under Rankin's direction, HCHA has been recognized by the U.S. Department of Housing and Urban Development as the highest-performing housing authority in the region for seven consecutive years and was recently named one of America's 10 Best Public Housing Authorities.