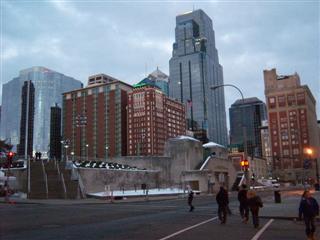 With its $122 million announcement this week, HUD is building on the Choice Neighborhoods planning grants it unveiled in the spring, including funding for important efforts in Kansas City, Providence and Philadelphia, in which LISC is also among the local partners driving revitalization.

"Choice Neighborhoods is important because it's about rebuilding whole communities in ways that respond directly to local conditions," noted Mary Paumen, director of LISC's Housing Authority Resource Center. "HUD and the Obama Administration have wisely developed federal programs like Choice Neighborhoods, Promise Neighborhoods and Sustainable Communities that move past the silo'ed aspects of community development to concentrate on the broader economic and social health of both places and people.  They leverage significant private and philanthropic support that goes well beyond any one project."

The $30.5 million Chicago grant to Preservation of Affordable Housing (POAH) in partnership with the city of Chicago, supports revitalization in the Woodlawn community that is anchored in part by the redevelopment of Grove Parc Plaza, a troubled Section 8 project that has long destabilized the surrounding area.  The grant connects to $272 million in investments that are part of LISC's Woodlawn New Communities Program, including funding for new retail space, a community center, educational interventions, and a plan to deal with the large number of local foreclosures.

In Boston, the $20.5 million grant to the city of Boston, in partnership with the Dorchester Bay Economic Development Corporation, is focused on Woodledge/Morrant Bay Apartments, a severely distressed assisted multifamily housing development.  It is part of the city's Quincy Corridor Transformation Plan, which also includes aggressive efforts to improve public education, deal with vacant land, build and improve nearby parks and community facilities, create jobs and support economic development.  It is a $92 million project, with LISC providing predevelopment loan dollars and technical assistance to help revitalize the housing, as well as direct funding to surrounding projects and partners.

"These HUD grants are high-impact dollars supporting high-impact efforts," noted Vincent O'Donnell, director of LISC's Affordable Housing Preservation Initiative.  He pointed to the experienced development, services and funding partners, and applauded the extent to which the new grants connect to ongoing redevelopment efforts in the surrounding area.  "With these grants, HUD is helping both preserve affordable housing and improve quality of life."

Choice Neighborhoods is an evolution of the federal HOPE VI program that takes a more comprehensive approach to neighborhood redevelopment.  It dovetails with LISC's national Building Sustainable Communities initiative, an effort LISC launched in 2007 to organize and support integrated efforts focused not only on the built environment, but also on quality schools, revitalized commercial corridors, job creation, safe streets, recreational programs, financial literacy for low-income families, urban farms and markets, and community health care, among many other things. See more on LISC's Building Sustainable Communities

"Housing redevelopment is critically important," noted Bob Van Meter, Boston LISC executive director. "But the health of a community isn't just about the buildings on the street.  It takes much more to regain stability and move toward growth.  Choice Neighborhoods recognizes that.  So, too, does LISC."

"Our goal is to help communities take control of their future, improve their quality-of-life and thrive," noted Susanna Vasquez, Chicago LISC executive director.  "Choice Neighborhoods will have a remarkable impact on people and places trying to rise above economic dislocation.  For them, it is life-changing."