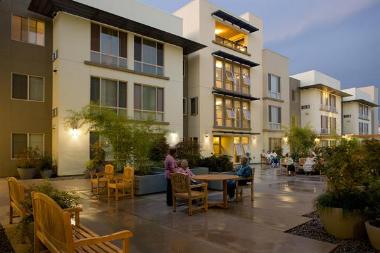 WASHINGTON, DC - Builders in the 55+ housing market are significantly more optimistic about production and demand for multifamily rental units than they are for sales of single-family homes or multifamily condos, according to the latest 55+ Housing Market Indices that are compiled quarterly by the National Association of Home Builders (NAHB). All of the components measuring production and demand for 55+ multifamily rental units increased significantly in the second quarter of 2011 compared to the same period a year ago.

In comparison, the 55+ Housing Market Indices for single-family units and multifamily condos were largely unchanged with increases from 12 to 13 and from 7 to 8, respectively.

"Like those in other age groups, many people in the mature-market sector are hesitant to buy," said NAHB Chairman Bob Nielsen, a home builder from Reno, Nev. "Among the factors keeping prospective home buyers on the sidelines are ongoing uncertainty about the economy and concerns about selling their existing homes. Low appraisals and tighter mortgage lending criteria are also constraining the market."

The 55+ Housing Market Indices (HMI) for single-family homes and multifamily condos measure builder sentiment based on current sales, traffic of prospective buyers and expected sales six months in the future.

The 55+ Multifamily Rental indices showed increases from 15 to 28 in current production, from 16 to 29 in expected production six months in the future, and from 31 to 43 in current demand for existing units.

"Multifamily rentals are the strongest segment of the 55+ housing market at present," said Nielsen. "The largest increase in a 55+ Multifamily Rental index was in expected demand six months in the future, which rose from 30 to 44," he said. "An increase in demand is always good news, but this could also foreshadow a shortage of rental units in the future. Demand is already running ahead of production, and the continuing difficulty in obtaining credit to finance new construction could result in shortages down the road."

Among the components of the 55+ Single-Family index, present sales were unchanged at 12, and expected sales increased one point from 17 to 18. Traffic of prospective buyers increased from 12 to 13.

The 55+ Multifamily Condo index components showed a slight increase - from 7 to 8 - in current sales. Expected sales six months in the future were unchanged at 10, and traffic of prospective buyers increased slightly from 5 to 7.