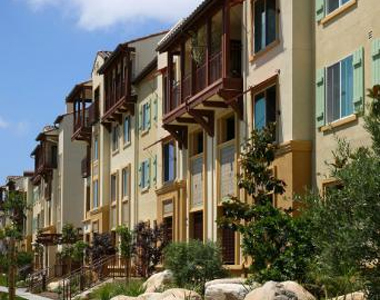 LOS ANGELES, CA - Withee Malcolm Architects joined their clients and community representatives to celebrate major milestones on two new affordable communities. On July 14, the architects were on hand as Thomas Safran Associates broke ground on Del Rey Square, 124 units of senior affordable housing to be constructed at 11976 Culver Boulevard in Los Angeles. Earlier this summer, the firm celebrated the opening of the Royale Apartments, a 36-unit workforce housing community for families developed by AMCAL Multi-Housing in the City of Westminster.

"Our commitment to designing high quality affordable housing continues to grow as we see the impact that these communities have, not only on the lives of the residents, but on the neighborhoods and towns where they are located, and on the regional economy," says Dan Withee, founding partner of Withee Malcolm Architects."

While the two projects differ in scale and in the populations they are designed to serve, the concepts and constraints that shaped these developments are similar. "At both Royale and at Del Rey Square we were working with challenging infill sites in established neighborhoods that were initially resistant to the idea of these communities, based on an outdated understanding of 'affordable housing,'" notes Ricky de la Rosa, senior associate. "Meeting with neighbors and local officials, showing them other examples of affordable communities and tailoring our designs to the local context helped to change misperceptions," adds Withee.

In Westminster, Withee Malcolm's Mediterranean-inspired design for Royale capitalizes on the long, narrow parcel on Hospital Circle that formerly housed a medical clinic. Raising the building to accommodate a high water table, the designers introduced attractive landscape berms as camouflage and reduced the verticality of facade with a modulated design.

In designing Del Rey Square, the architects were sensitive to the privacy concerns of the current residents in the Los Angeles neighborhood near the corner of Culver Boulevard and Stoner Avenue.  While the four-story building is significantly larger than its single-family neighbors, the Spanish Revival architecture is stepped back to minimize the sense of scale. On the alley side immediately adjacent to existing homes the rear façade was reduced by one floor and windows were minimized by facing the units into internal courtyards with patios and outdoor amenities.