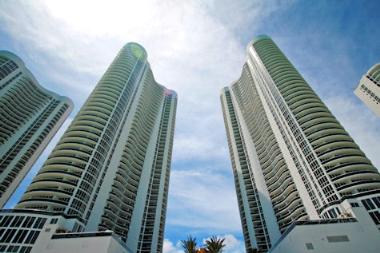 SUNNY ISLES BEACH, FL - An affiliate of Dezer Properties, LLC, who in March, 2010 assumed an existing loan from a development partnership and began finalizing the sales of all remaining units at Trump Towers, today announced that it had paid off a $265 million mortgage on Trump Tower II and III The three-tower, luxury oceanfront condominium development is located at 16001 Collins Avenue, Sunny Isles Beach, Florida.

The project’s three towers each have 45 stories and 271 units, for a total of 813 units. Tower I is sold-out and occupied. Tower II and Tower III, which had a combined 475 units remaining to sell when the Dezers assumed the loan, now have slightly more than 100 units remaining.

“This is extremely positive news for South Florida’s luxury residential real estate market,” said Gil Dezer, president of the Dezer entities. “When we assumed this obligation in March 2010, the bank gave us a four year time-frame to sell the remaining units based on current absorption rates for the area. We look forward to completing the sales of the remaining units well before that time-frame.”

The Dezer’s marketing strategy included price adjustments based on the new economic realities of the marketplace, with price points ranging from as low as $350 per square foot, to $600 per square foot.

Dezer expects that the remaining 100+ units will sell in the range of $650,000 to $2.2 million, with higher price points for select combined and penthouse units.

“The opportunity to purchase oceanfront property in a building of this quality has been paramount to our sales success,” continues Dezer. “We are confident that a purchase at Trump Towers affords buyers the best value of any location on Miami Beach.”

The $265 million loan was the second significant pay-off in the last eight months for another affiliated Dezer entity. The company paid-off a $210 million construction loan in December, 2010 for another Dezer project, Trump Royale, located just north of Trump Towers in Sunny Isles Beach.

Trump Towers was New York real estate mogul Donald Trump’s second licensed branded development with the father and son team of Michael and Gil Dezer. The Dezers and Trump collaborated on Trump Grande in Sunny Isles Beach, the three-building oceanfront enclave consisting of the Trump International Beach Resort, which is completed and occupied, as well as the Trump Palace and Trump Royale, located on 180th Street and Collins Avenue.

The Dezers have compiled an impressive portfolio of oceanfront developments, which includes 45-acres of prime oceanfront property in Sunny Isles Beach. In addition to their Miami Beach properties, the Dezers’ holdings include more than twenty properties in New York, including the Simon Dezer building on 5th Avenue, the Chelsea Antiques building, the Chelsea Design Center and the Chelsea Arts Forum.

“Miami Beach is a very special destination,” concludes Dezer, “coupled with the Trump name, buyers understand the unprecedented value of these properties.”