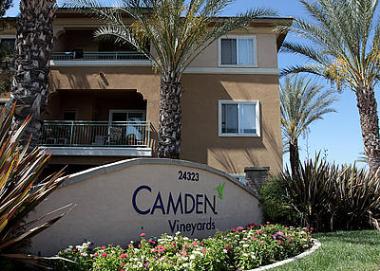 HOUSTON, TX - Camden Property Trust announced the acquisition of a portfolio of eight apartment communities for approximately $261 million through its discretionary investment funds (“Fund”), in which it owns a 20% interest. The communities acquired are located in the Houston, Dallas, Austin and San Antonio metropolitan areas and consist of 2,957 apartment homes with an average age of 3 years and an average occupancy of 95%.

“We are pleased to have acquired a high-quality portfolio of apartment homes, located in some of the nation’s highest employment and population growth markets,” said Richard J. Campo, Camden’s Chairman and Chief Executive Officer. “These assets were acquired at a discount to replacement cost and should provide attractive returns on our investment.”

The Fund has three additional apartment communities from the same portfolio located in the Houston and San Antonio metropolitan areas under contract for approximately $59 million that are expected to close during the third quarter of 2011.

In addition to historical information, this press release contains forward-looking statements under the federal securities law. These statements are based on current expectations, estimates and projections about the industry and markets in which Camden operates, management's beliefs, and assumptions made by management. Forward-looking statements are not guarantees of future performance and involve certain risks and uncertainties which are difficult to predict.

Camden Property Trust, an S&P 400 Company, is a real estate company engaged in the ownership, development, acquisition, management and disposition of multifamily apartment communities. Camden owns interests in and operates 196 properties containing 67,205 apartment homes across the United States. Upon completion of seven properties under development, the Company's portfolio will increase to 69,170 apartment homes in 203 properties. Camden was recently named by FORTUNE® Magazine for the fourth consecutive year as one of the “100 Best Companies to Work For” in America, placing 7th on the list.