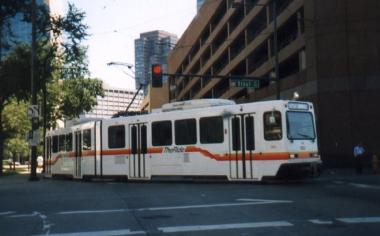 DENVER, CO - The Urban Land Conservancy (ULC) today announced the purchase of land along Denver's FasTracks Southwest light rail corridor that will be developed into an affordable, mixed-use transit-oriented development. This is the fourth property ULC has acquired using Denver's Transit-Oriented Development (TOD) Fund, and will provide much-needed workforce housing and retail opportunity directly across from the Evans Light Rail Station.

ULC purchased the .96-acre property at 2140 S. Delaware Street for $1,197,900 using the TOD Fund. The Fund was set up specifically for acquiring and preserving land for workforce housing near existing or future light rail stops and high frequency bus routes. It is financed in part by the City and County of Denver and Enterprise Community Partners, who is also the administrator of the Fund. ULC's President and CEO, Aaron Miripol, states, "This site being directly across the street from the Evans Station will provide much economic opportunity in a prime location, giving people easy transit access for jobs and education opportunities. We expect this development to be catalytic to the area, encouraging additional community investment."

ULC is partnering with affordable housing developer Medici Communities LLC, who was recently awarded $1,045,505 in annual low-income housing tax credits (LIHTC) from Colorado Housing and Finance Authority (CHFA), for the project. The LIHTC program provides the private market with an incentive to invest in affordable rental housing.

Medici's Evans Station Lofts will be a five-story development, which will include 50 residential workforce units and 7,100 square feet of retail and commercial space. This project will be the first family LIHTC project at an existing light rail station along RTD's FasTracks and will serve households with incomes ranging from 30% to 60% of the Area Median Income (AMI).

Denver City Councilman Chris Nevitt represents the district where the land was purchased and welcomes the prospect of development in the area. "The City and the community have spent so much time and energy planning for development in this area. We're very excited that actual development will now be taking place -- particularly this kind of transit-oriented development."

Established in 2003, Urban Land Conservancy is a nonprofit organization that uses real estate as a tool to benefit urban communities. ULC acquires, preserves and develops land for urban assets such as workforce housing, nonprofit office space and schools.