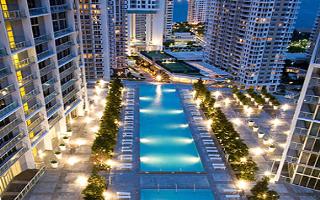 MIAMI, FL - Condominiums at the Residences and Hotel at Viceroy Tower in Miami's Brickell community are now completely sold, marking the sellout of the first of three towers at the ambitious Icon condo development. "Advanced sales enhancement techniques including aggressively marketing the property to international prospective buyers was instrumental in this sellout of Miami condos," according to Alicia Cervera Lamadrid, the Exclusive Broker responsible for marketing and selling the project.

With today's announcement, the Viceroy has now transitioned into being one of the community's great real estate success stories. Experts agree, the completion of this project could serve as an early indicator of robustness returning to the market in and around Miami's downtown area.

"By understanding the uniqueness of the property among a sea of 'typical condos' we were able to accentuate the true benefits of a flexible living and ownership option, particularly for the international buyer demographic that makes up so much of this market right now," said Jesse Ottley, sales director at the Viceroy Residences.

The Viceroy Tower consists of 527 hotel condo units and it stands 53 stories above the Brickell and Downtown areas. The lower 15 floors operate as a hotel, while the upper floors are hotel condominium units. The property is located at 485 Brickell Avenue in the northern end of Miami's Brickell area, where Brickell meets the Miami River.
Source: Viceroy Tower