Roommate of the Year Video Contest Kicks Off 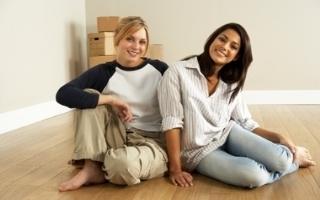 CHICAGO, IL - Apartments.com is looking to crown America's best roommate in its third annual Roommate of the Year video contest with a grand prize of free rent for one year plus $10,000 in cash and a one year membership to freecreditscore.com. According to a recent Apartments.com survey, 45 percent of renters currently live with a roommate or plan to move in with one, so finding the right person to live with is an important decision for a large number of renters. In 2010, Andrew Prestler of Kokomo, Indiana and a student at Ball State beat out stiff competition to be named the 2010 Roommate of the Year by Apartments.com. To capture those unique qualities that make a great roommate exceptional, Prestler composed an original rap and created an eye-catching video, singling him out as the "Da Best" and securing his title as the Apartments.com Roommate of the Year. Beginning April 25, 2011, renters can view last year's winning video for inspiration, enter the contest and get details for submitting their own entries at: www.roommateoftheyear.com.

Finding the ideal roommate can be tough, and with recent census data illustrating that people are holding off on marriage until they are older, people may find themselves living with a roommate for longer than they originally planned. Meanwhile, apartment rents have steadily risen since 1980 and are likely to continue that trend this year with experts projecting that rents will rise by 3.5-4.5 percent each month in 2011.

A recent Apartments.com survey reveals that 77 percent of respondents have never lived with a roommate they would consider "the best," – up 17 percent from last year's survey – and more than half are not planning on living with their current roommate when they move. The Roommate of the Year Contest seeks to find those roommates who do qualify as" the best" and showcase them for America to see.

"Most people take choosing a roommate very seriously and put a lot of thought and time into making the right selection. This contest gives people a fun and creative outlet to express their feelings about their living situations," said Tammy Kotula, Apartments.com spokesperson. "It's always fun to see what people really think makes a good roommate. The video entries that we receive are as varied and unique as roommates themselves."

Prestler continues to prove his claim as 2010 Apartments.com Roommate of the Year, as one of his current college roommates has already signed up to live with him again for the 2011-12 school year.

"I say a lot of over-the-top things in my video about what it takes to be the best roommate and be named the Apartments.com Roommate of the Year," states Prestler. "But in reality, a big part of being a good roommate is being respectful and treating people the way you want to be treated."

Apartments.com survey findings also show that the number one quality people look for in a roommate is someone who is responsible and pays the bills on time.

How to Enter the 2011 Apartments.com Roommate of the Year Contest

Get out the video camera, get creative and get one step closer to winning free rent for a year, plus $10,000 in cash, a one year membership to freecreditscore.com and the coveted Apartments.com 2011 title of Roommate of the Year. Renters across the nation are invited to enter the Apartments.com Roommate of the Year Contest by submitting a video entry of two minutes or less to http://www.roommateoftheyear.com.

Entrants are challenged to showcase the specific attributes that quality them to be Roommate of the Year by featuring their inner roomie in one of the four contest categories. For detailed information on how to enter, including specific video instructions, an official entry form and contest rules, go to http://www.roommateoftheyear.com. All entries must be received by noon EDT on June 13, 2011.

Roommate of the Year Contest Categories

Apartments.com Roommate of the Year Contest entrants should distinguish themselves from all of the other roommates around the country. Finding the category that best defines their special roommate skills is job number one. Categories are:

The Loveable Compulsive
It's not a glamorous job, but somebody has to do it. Making sure the electric bill gets paid each month and scrubbing the microwave after someone's "soup explosion" two months ago sometimes makes you feel like you are running a daycare in your apartment. But all that work is about to pay off big. Show us how you manage the household while still maintaining your sanity and a year of FREE Rent could leave you with one less item on that LONG to-do list.

The Purr-fect Pet Owner
Sometimes the best roommates aren't even human. They may not pay rent, but pets are great at making us laugh or helping us get through tough times. Show us what makes you the best roommate to your pets including games you play together or tricks that they have learned and that freeloader can start pulling his or her weight by helping you win FREE Rent for a Year.

The Environmentalist
Do you wash out and reuse plastic baggies? Switch out energy-guzzling 150W bulbs for CFLs? Know what "1," "3," "5," or "7" means on plastic bottles? If you're the roommate who makes living "green" a priority, this is your category. Show us your efforts to help save the planet and we could be recycling a year of FREE Rent into your bank account (and promising to turn off the lights when we leave a room!).

The All-Star Roomie
If you have special roommate qualities that don't fit the categories, or don't want to commit to only one area of roommate greatness, use this entry to submit your video. Get crazy, get creative! But don't just tell us why you're the best roommate – show us – and you could win FREE Rent for a Year.

Renters' entries will be judged with equal weight on (1) originality and creativity, (2) overall "wow" factor, (3) persuasive argument and (4) style and production. Judging will take place in three stages.

How to Become Roommate of the Year and Win Free Rent for One Year Plus $10,000 in Cash

All entries will be narrowed down to a field of up to 15 finalists, selected across all categories by a panel of judges looking for entries that best fit the criteria for Roommate of the Year. Once the finalists are selected, America, along with the Apartments.com panel of qualified judges, will vote for their favorite roomie using the judging criteria to narrow down the competition to five winners. From the five winners, one Grand Prize winner will be named and receive free rent for one year, plus $10,000 in cash, along with roommate bragging rights. The four runners-up will each receive $500.
Source: Apartments.com