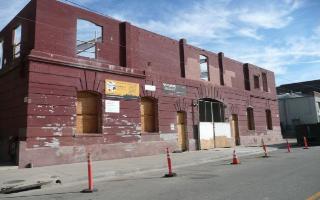 After taking ownership of the property in late 2010, Canyon engaged a team, including R.D. Olson and Rockefeller Partners Architects, to complete the revitalization of the historic property that was first built in 1906 as a beet sugar warehouse for the Spreckels Sugar Company. In addition, Canyon has retained the original developer, The Borman Group, as an advisor to the project. The warehouse was earlier renovated in 1982 to accommodate artists' studios and offices, and in 2007 the building was completely gutted, but construction stalled in mid-2008 due to the economic downturn.

The property is located in the heart of the Arts District, one of the most diverse neighborhoods within downtown Los Angeles. The Arts District serves as home to thousands of people who are drawn to the area for its lower density, relaxed community, history and close proximity to some of the City's best bars, restaurants, shops, art galleries and studios. 940 East 2nd Street is a short walk from Little Tokyo, which features museums, art studios, shopping, nightlife and dining venues, and is located just blocks away from the Metro Gold Line.

"We are proud to be investing in our home base of Los Angeles and to be part of the continued revitalization of the Downtown Arts District," said Canyon Managing Partner Bobby Turner. "Upon completion, 940 East 2nd Street will blend the comforts of a well-appointed townhome with affordable, urban living."

"From the beginning, we have been dedicated to bringing quality housing to urban areas like the Arts District in downtown Los Angeles," said Canyon-Johnson Partner, Earvin "Magic" Johnson. "940 East 2nd Street is a great project because it will help create new residential opportunities near public transportation and bring people closer to where they work."

The Canyon-Johnson Urban Funds (CJUF) are one of the country's largest private real estate funds focused on the development of urban properties in underserved neighborhoods. A joint venture between Canyon Capital Realty Advisors and an entity of Earvin "Magic" Johnson's Magic Johnson Enterprises, the funds were formed to identify, enhance and capture value through the development and redevelopment of real estate in densely populated, ethnically diverse urban communities. Fundamental to Canyon-Johnson's investment thesis is its commitment to a "triple bottom line" philosophy of achieving superior financial results, fostering opportunities within urban communities, and embracing environmental responsibility. With nearly $2 billion in committed equity capital, the funds are positioned to facilitate more than $8 billion in development and revitalization in major U.S. metropolitan areas.
Source: Canyon-Johnson Urban Funds