Homes Will Be Greener and Smaller by 2015 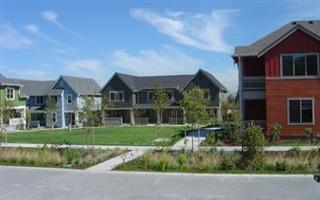 WASHINGTON, DC - A recent study by the National Association of Home Builders (NAHB) shows that while consumer hesitations on home buying is waning, the recent housing downturn has changed what Americans are looking for in their next home. The survey research on consumer preferences, which is presented annually at the NAHB International Builders' Show, suggests that the severity of the recession has left an indelible mark on prospective home buyers, who have shifted their perspective on the housing they want and need.

Builders surveyed expect homes to average 2,152 square feet in 2015, 10 percent smaller than the average size of single-family homes started in the first three quarters of 2010.

To save on square footage, the living room is high on the endangered list - 52 percent of builders expect it to be merged with other spaces in the home by 2015 and 30 percent said it will vanish entirely.

"As an overall share of total floor space, 54 percent of builders said the family room is likely to increase," said Rose Quint, NAHB's assistant vice president for survey research. "That makes it the only area of the home likely to get bigger."

In addition, the relative size of the entry foyer and dining room are likely to be diminished by 2015. However, opinions were fairly evenly divided on the fate of the kitchen, master bedroom and bath and mudroom, she said.

The average new home of 2015 is likely to feature a great room comprised of the kitchen, foyer and living room; a walk-in closet in the master bedroom; a laundry room; ceiling fans; a master bedroom on the first floor in homes with two stories; and a two-car garage.

In addition to floor plan changes, 68 percent of builders surveyed say that homes in 2015 will also include more green features and technology, including low-E windows; engineered wood beams, joists or tresses; water-efficient features such as dual-flush toilets or low-flow faucets; and an Energy Star rating for the whole house.

The full study and survey methodology can be found online at www.housingeconomics.com