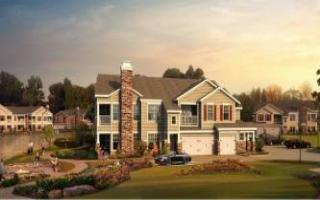 ST. LOUIS, MO - The AFL-CIO Housing Investment Trust (HIT) announced today that it is providing $42 million in financing for two multifamily developments in the greater St. Louis area. Council Tower Senior Apartments in downtown St. Louis, and Parkway Lakeside Apartments in O'Fallon, Illinois, will provide 509 units of multifamily housing, while creating an estimated 600 union construction jobs in an area where the construction industry has been especially hard hit by the economic downturn.

The HIT's investment of $15.8 million in the $29.7 million Council Tower project in Midtown St Louis will help the city serve the housing needs of low-income elderly residents. Built in 1968, Council Tower has 277 units of senior housing, with 90% of the units now designated as affordable. The HIT is helping finance renovation work to modernize and upgrade the aging building.

In O'Fallon, Illinois, one of the fastest growing communities in the greater St. Louis metro-east region, construction is underway on the $28.2 million Parkway Lakeside development. The HIT is contributing $26.1 million of the project's financing. The new complex will include multiple two-story buildings offering 232 market-rate housing units.

"These projects are part of a growing list of HIT-financed properties that are bringing development, jobs and mixed-income housing to the greater St. Louis area," said Terrance Pearson, HIT Director of FHA Finance. "These are good investments for the HIT portfolio. We will continue to work with the St. Louis development community to identify new investment opportunities."

"The jobs created by these investments are helping keep the HIT on track to achieve its goal of generating 10,000 union construction jobs by this spring through the investment of union pension capital," said HIT Executive Vice President and Chief Investment Officer Stephanie H. Wiggins. "I am pleased to say that to date, our Construction Jobs Initiative has achieved 90% of this goal."

Jeff Aboussie, Executive Secretary-Treasurer of the St. Louis Building and Construction Trades Council, said, "Construction workers in the St. Louis greater metro area have been devastated by high unemployment. By investing in these projects, the HIT is creating good union jobs that are putting our members back to work." He added that these HIT projects are "a great investment for our members' pension funds."

Dale Stewart, Executive Secretary-Treasurer of the Southwest Illinois Building and Construction Trades Council, credits the HIT project "with keeping our members on the job and out of the unemployment line."

Under its Construction Jobs Initiative begun in early 2009, the HIT has invested $174 million to support five projects in the St. Louis metro area that represent more than 2,550 jobs for members of the local building and construction trades unions. Besides providing a major boost to the local economy, these projects also represent 1,110 new or rehabilitated housing units for local residents. In addition to Council Tower Senior Apartments and Parkway Lakeside Apartments, other St. Louis-area projects financed through this initiative are:

The AFL-CIO Housing Investment Trust is a fixed-income investment company registered with the Securities and Exchange Commission. It manages nearly $3.9 billion in assets for approximately 350 investors, which include union and public employee pension plans. Fifty nine of these investors are in Missouri and Illinois. The HIT invests primarily in government and agency insured and guaranteed multifamily and single family mortgage-backed securities. The HIT is one of the earliest and most successful practitioners of socially responsible, economically targeted investing, with a track record that demonstrates the added value derived from union-friendly investments. The investment objective of the HIT is to provide competitive returns for its investors and to promote the collateral objectives of constructing affordable housing and generating employment for union members in the construction trades and related industries. Since its inception, the HIT has invested $6 billion to finance more than 97,000 units of housing nationwide, generating approximately 66,000 union jobs.
Source: AFL-CIO Housing Investment Trust