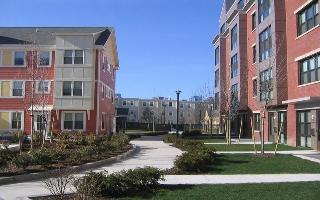 WASHINGTON, DC - The AFL-CIO Housing Investment Trust (HIT) is helping to finance a number of energy-efficient development projects that have received or are on track to receive Leadership in Energy and Environmental Design (LEED) certification for their sustainable energy and construction strategies as well as innovative green design.

"The HIT is proud of its long history of socially responsible investing," said HIT Executive Vice President and Chief Investment Officer Stephanie Wiggins. "Investing in LEED-certified projects that help conserve natural resources while providing healthier places to live and work is just one more way the HIT is making a positive difference in the lives of working people and their communities."

To date, the HIT has provided $274 million of financing for 11 projects that have received or are expected to receive LEED designation. The projects have created 1,653 housing units and approximately 4,100 union construction jobs, while leveraging more than $660 million of development activity for communities in Minnesota, California, New York, and Massachusetts.

Arc Light Co., San Francisco: The developer of this $48 million project in San Francisco's South Beach community is seeking LEED Gold certification for the 94-unit complex. The HIT committed $32.5 million last year for the project, which involves the conversion of a historic commercial building into an innovative multifamily development. Work on the project is generating more than 275 union construction jobs.

Elizabeth Seton Pediatric Center, Yonkers: Designed to be a LEED-certified facility, the new $116 million Elizabeth Seton Pediatric Center is currently under construction just outside of New York City. Last year the HIT committed $100 million in financing for the project that will feature a 137-bed in-patient center and on-site school for medically fragile children. The project is expected to bring nearly 1,000 construction and permanent union jobs to Yonkers.

Excelsior & Grand, St. Louis Park, Minnesota: The Excelsior & Grand mixed-use community just outside Minneapolis was awarded the nation's first "LEED for Neighborhood Development" certification. According to the U.S. Green Building Council (USGBC), "Excelsior & Grand has earned this recognition for excellence in the built environment and a place among the finest developments incorporating the principles of smart growth, urbanism and green design." The HIT provided $55.5 million in 2001 for the $61.7 million project that generated over 370 union construction jobs and 337 housing units.

The LEED certification program is a nationally recognized benchmark for measuring the design, construction, and operation of high-performance green buildings. It was developed by the USGBC to encourage adoption of sustainable green building and development practices in the United States and around the world.

The AFL-CIO Housing Investment Trust is a fixed-income investment company registered with the Securities and Exchange Commission. It manages nearly $3.9 billion in assets for approximately 350 investors, which include union and public employee pension plans. The HIT invests primarily in government and agency insured and guaranteed multifamily and single family mortgage-backed securities. The HIT is one of the earliest and most successful practitioners of socially responsible, economically targeted investing, with a 45-year track record that demonstrates the added value derived from union-friendly investments. The investment objective of the HIT is to provide competitive returns for its investors and to promote the collateral objectives of constructing affordable housing and generating employment for union members in the construction trades and related industries. Since its inception, the HIT has invested $6 billion to finance 97,000 units of housing nationwide, generating approximately 66,000 union jobs.
Source: AFL-CIO Housing Investment Trust