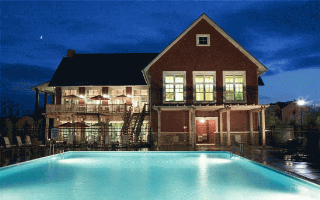 CLEVELAND, OH - Associated Estates Realty Corporation announced today that it has closed on the acquisition of a Class A apartment community located in Ashburn, Virginia, which will now be known as Westwind Farms. The 464-unit property was built in 2006 and is located in highly desirable Eastern Loudoun County. Westwind Farms is approximately six miles from Dulles International Airport. A new Washington Metro train stop is due to open one mile from the property in 2016.

The average rent is $1,249 per month and the property is currently 96 percent occupied. Associated Estates now owns 1,272 units at three apartment communities in Northern Virginia.

The acquisition was funded by cash on hand and borrowings on the Company's unsecured line of credit, which had no balance drawn prior to the closing of Westwind Farms. The Company has acquired 1,494 units for a total of approximately $255 million so far in 2010.

Associated Estates is a real estate investment trust ("REIT") and is a member of the Russell 2000 and the MSCI US REIT Index. The Company is headquartered in Richmond Heights, Ohio. Associated Estates' portfolio consists of 52 properties containing 13,662 units located in eight states.
Source: Associated Estates Realty