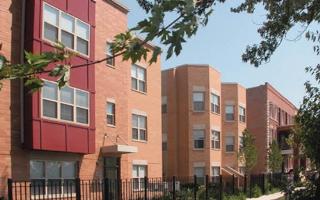 CHICAGO, IL - Chicago's historic Bronzeville neighborhood has experienced a rebirth over the past decade with private and public investment fueling the creation of new housing, commercial development, schools, and parks. On Wednesday, December 1st at 4:00pm, neighbors and public officials will be on hand to celebrate the opening of the latest addition to Bronzeville's growing housing stock: Savoy Square at Legends South. To mark the occasion and unveil a mural created by noted Chicago artist Gregory Gove will be 3rd Ward Alderman Pat Dowell, and Chicago Housing Authority CEO Lewis Jordan.

The $44.9 million, 138 unit rental complex developed by the Brinshore-Michaels team is the fourth phase of Legends South, the mixed-income redevelopment of the former Robert Taylor Homes. Built on portions of the former CHA owned site and on infill sites in the adjacent neighborhood to the east of State Street, the three prior, phases Mahalia Place, Hansberry Square, and Coleman Place have brought a total of 409 fully occupied units of new mixed-income rental housing to the Bronzeville community since 2006.

Conveniently located just four miles south of downtown Chicago, Savoy Square is bounded by State Street on the east, 43rd Street on the north, Federal Street on the west, and 45th Street on the south, just one block east of the Dan Ryan Expressway (I-90/94), and easily accessible by public transportation. The development which is comprised of 20 diverse buildings, from townhomes and three-flats to nine- and twelve-flats offers a mix of one-, two-, three-, and four-bedroom rental units, with a variety of floor plans available as well as a 5,200 foot community center and management office. All apartments have attractive, modern finishes and appliances, including in-unit washers and dryers. Of the 138 apartments, 28 are targeted to market-rate renters, 50 to those with low-to-moderate household incomes, and 60 are reserved for public housing eligible households. Future plans include the development of for-sale homes which will be made available to those across the income spectrum.

"Savoy Square is another important step in our ongoing effort to transform public housing in Chicago and end the physical and economic isolation created by the former Robert Taylor Homes and developments like it," said Whitney Weller, Senior Vice President of Michaels Development Company. "We are proud to be part of the renewal of a community that was long the epicenter of African-American culture in Chicago as so brilliantly captured in the mural created by Gregory Gove." The name of the new development also pays tribute to Bronzeville's storied Savoy Ballroom, just as prior phases of Legends South have honored the lives of prominent African-Americans with ties to the community: Gospel singer Mahalia Jackson, playwright Lorraine Hansberry and aviator Bessie Coleman.

The rental units at Savoy Square have been funded through a variety of sources. These include $30 million in equity provided by JP Morgan Chase raised from Low Income Housing Tax Credit allocations by the Illinois Housing Development Authority and the City of Chicago Department of Community Development, $11 million in CHA HOPE VI funds, and other public and private financing.

The developer of Savoy Square, Brinshore-Michaels, is a partnership of Brinshore Development, LLC , of Northbrook, and Michaels Development Company, based in Marlton, New Jersey. Both companies have a wealth of experience in affordable and mixed-income housing. Brinshore is among the top producers of affordable housing in Illinois. The company has developed over 4,000 units since 1994. Michaels is an industry leader nationally, with more than $2.5 billion in development and rehabilitation projects completed or underway. Brinshore and Michaels are also partners in Westhaven Park, the successful mixed-income redevelopment of the CHA's Henry Horner Homes, in Chicago's Near West Side community. Interstate Realty Management, a sister company to Michaels Development, will provide property management and community and supportive services to Savoy Square.
Source: Savoy Square