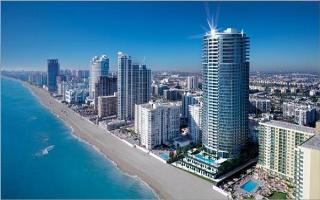 "Trump Hollywood is one of the most magnificent condominium buildings in South Florida, offering tremendous value to affluent condominium purchasers," said BH3 Partner Daniel Lebensohn. "Our team is very pleased with the deal we negotiated with The Related Group and its lenders at HSBC."

Jorge Perez, Chief Executive Officer of The Related Group, stated: "Along with Apogee, Trump Hollywood is one of my most prideful development accomplishments as it far exceeds the traditional definition of luxury."

King Street, a New York-based investment firm, and developer BH3, led by Lebensohn, Charles Phelan and Gregory Freedman, has closed on the property and assumed ownership. Related will oversee sales for Trump Hollywood and also collaborate with BH3 in the overall management of the property. Of the development's 200 residences, 22 have been sold and closed. A relaunch is planned for January.

Trump Hollywood is situated on a five-acre site and features two- and three-bedroom residences ranging in size from 2,070 to more than 7,000 square feet, all with private elevator access and spectacular, panoramic ocean, Intracoastal and city views from private oversized terraces. Additional residence amenities include Miele and Sub-Zero appliances, Italian kitchen and bath cabinetry with a selection of finishes, and Smart Building technology featuring a wireless touch screen pad linking residents to building amenities and services.