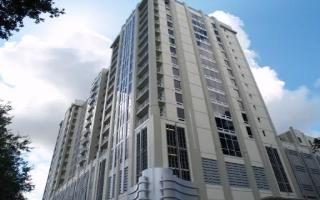 ORLANDO, FL - Sales of existing condominiums in Florida rose 10 percent in September, with a total of 5,675 condos sold statewide compared to 5,140 units sold in September 2009, according to the latest housing data released by Florida Realtors®.

Meanwhile, in the year-to-year comparison for existing home sales, a total of 13,536 single-family existing homes sold statewide last month compared to 14,781 homes sold in September 2009 for a decrease of 8 percent. Florida's median existing-home sales price in September was $133,400; a year earlier, it was $141,700 for a decrease of 6 percent. The median is the midpoint; half the homes sold for more, half for less.

"Like the rest of the nation, Florida's housing market is feeling pressure from an uncertain economy," said 2010 Florida Realtors President Wendell Davis, a broker with Watson Realty Corp. in Jacksonville. "Easing foreclosures and increasing job growth would go a long way in stabilizing the market and strengthening the economic recovery. However, current record low mortgage rates along with available and affordable inventory continue to offer a rare opportunity for consumers who are ready to buy a home."

NAR's latest industry outlook calls for a gradual improvement in home sales in upcoming months. "Attractive affordability conditions from very low mortgage interest rates appear to be bringing buyers back to the market," said NAR Chief Economist Lawrence Yun. "However, the pace of a home sales recovery still depends more on job creation and an accompanying rise in consumer confidence. The housing market is trying to recover on its own power without the homebuyer tax credit."

In September, the interest rate for a 30-year fixed-rate mortgage averaged 4.35 percent, significantly lower than the 5.06 percent average during the same month a year earlier, according to Freddie Mac. Florida Realtors' sales figures reflect closings, which typically occur 30 to 90 days after sales contracts are written.
Source: Florida Realtors