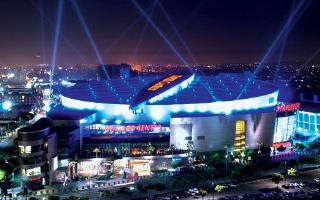 WASHINGTON, DC - Five outstanding developments have been selected as winners of the 2010 Urban Land Institute's (ULI) Global Awards for Excellence competition, widely recognized as the land use industry's most prestigious recognition program. The award winners, representing the world's best cross-regional models in land use practices, were announced today in conjunction with the ULI Fall Meeting in Washington DC.

The competition is part of the Institute's Awards for Excellence program, established in 1979, which is based on ULI's guiding principle that the achievement of excellence in land use practice should be recognized and rewarded. ULI's Awards for Excellence recognize the full development process of a project, not just its architecture or design. The criteria for the awards include leadership, contribution to the community, innovations, public/private partnership, environmental protection and enhancement, response to societal needs, and financial success.

"L.A. LIVE is a large scale project that breaks the myth of being too big to succeed," said Global Awards Jury Chairman Joseph E. Brown, Group Chief Executive of AECOM in San Francisco. "This development is a massive achievement that involved enormous participation from the public sector, creating an economically thriving asset for Los Angeles."

The Jury noted the project's market success, stating that L.A. LIVE "has transformed a stretch of underused land in downtown Los Angeles into a vibrant, 24-hour entertainment district and stimulated the development of more than 2,500 housing units, a grocery store, and dozens of restaurants and cafes in adjacent neighborhoods."

The 2010 winners were selected from 19 worldwide finalists, all of whom were winners in their region: The Americas, EMEA and Asia Pacific. The global awards jury evaluated these projects with additional criteria, including: innovative concepts that can be emulated around the world; strong urban design; response to the surrounding environment; and design that contributes to a livable, sustainable development that demonstrates relevance to the needs of the community.

According to ULI Chief Executive Officer Patrick L. Phillips, the award winners illustrate that well-designed, well-built projects can thrive even in the most challenging of economic times. "These global winners showcase the best in creativity, innovation, and long-term thinking," Phillips said. "The ULI Awards for Excellence program is a timely reminder of the key difference responsible land use can make in terms of community longevity and sustainability."

The four additional 2010 Global Awards for Excellence winners are (developers in parentheses):

Miasteczko Wilanow, Warsaw, Poland (Prokom Investments with IN-VI Investment Environments development consultant): Miasteczko Wilanow is the ongoing construction of a coherent neighborhood on 169 hectares within the boundaries of the city of Warsaw. The project is a community of retail, office, entertainment, and single family homes. Miasteczko Wilanow is a long-term project, a mid rise, mixed use, socially inclusive, architecturally rich, street and pedestrian oriented district that is now home to over 20,000 residents of different generations and backgrounds.

The Southern Ridges, Singapore (Urban Redevelopment Authority of Singapore): The Southern Ridges is a nine-kilometer chain of open spaces that connects the rolling hills of three existing parks. The project, visited by more than a million people since its opening, creates a rare contiguous recreational space in densely populated Singapore. Through careful planning and the innovative use of limited space, the project mixes elevated walkways, nature trails, and bridges to create an attractive public space.

Thin Flats, Philadelphia, Pennsylvania (Onion Flats): Certified LEED for Homes Platinum, Thin Flats is an eight-unit infill development in north Philadelphia that uses solar hot water heating, green roofing, and rainwater harvesting to reduce energy consumption by an estimated 50 percent. The development's architectural design was inspired by the Philadelphia "Row" home, while reconfiguring the relationship between the interior and exterior.

More information about ULI's Awards for Excellence program is at: www.uli.org/awardsandcompetitions

The Urban Land Institute (www.uli.org) is a nonprofit education and research institute supported by its members. Its mission is to provide leadership in the responsible use of land and in creating and sustaining thriving communities worldwide. Established in 1936, the Institute has nearly 30,000 members worldwide representing all aspects of land use and development disciplines.
Source: Urban Land Institute