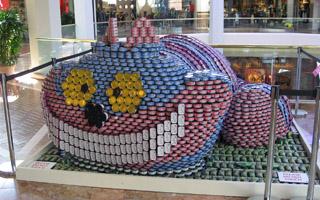 IRVINE, CA - Award-winning KTGY Group, Inc., Architecture and Planning, announced today that the firm's entry "We're All Mad Here" in Orange County's 3rd Annual Canstruction design/build competition at the South Coast Plaza in Costa Mesa, Calif. won "Best Use of Labels" Award for its 1.75-ton "Alice in Wonderland" looking Cheshire Cat, made entirely of canned food items and grinning from ear to ear. KTGY's innovative design and planning capabilities, normally reserved for real estate builders, owners, investors and developers of all property types, were used to design this very colorful, happy, five-foot tall CATstruction, which is comprised of nearly 6,500 Trader Joe's canned food items: over 3,000 cans of Trader Joe's tuna for the cat's head; 1,200 cans of anchovies and sardines encircling the cat's back and tail; and all of this rests on another 2,300-can skeleton of pasta, pinto beans, tomato sauce, and assorted greens guaranteed to add to a nutritious meal.

Helping to fight the CATastrophe that is hunger in Orange County, KTGY's Senior Project Designer Bryan Sevy said, "KTGY has always had an ambitious dream that one day cans would be judged not just by the color of their label, but by the content of their protein."

According to David Senden, a principal with KTGY, "This feline is proof that you are what you eat." KTGY reports that the Cheshire Cat will provide 130,000 grams of protein and nearly one million calories.

The Canstruction design/build competition serves as a canned food drive to support the Orange County Food Bank, which services more than 500,000 Orange County residents that are food insecure. KTGY and its personnel plus other benefactors generously donated $8,750 in canned food items. Local Trader Joe's stores donated some canned goods. OCB Reprographics in Irvine, Calif. provided the material and supplies for the sculpture platform.

KTGY's team, along with 13 other team participants made up of local architects, designers and engineers, worked feverishly throughout the night on Friday, September 3rd, after the close of business at the South Coast Plaza to assemble their can sculptures. Sevy served as the team captain for the CATstruction design/build and was assisted by other KTGY designers and staff including KTGY's CEO Tricia Esser, David Senden, Brian Davis, Jessica Musick, Ben Kasdan, Marissa Kasdan, Ben Seager, Sarah Sindian, Daniel Roberts, Keith Labus and David Obitz.

"We started building the Cat with 16 builders after the mall closed on Friday night at 10:00 p.m., and we finished with nine builders around 5:00 a.m. In total, I would estimate in the neighborhood of 500-600 man hours from the beginning of the design to the final completion," said Sevy.

"It's crazy how much time and energy went into this," noted Sevy. "We started with some pretty modest goals in mind, but as we went along we kept challenging ourselves, trying to make it better and better. We're really proud of the results, and it seems like the people at the mall are enjoying it, too. That's very satisfying."

"This has been a lot of effort, but it's nice to help people by doing something we enjoy - design," said KTGY's Brian Davis, LEED AP and designer. "We really challenged ourselves this year, but we're already talking about next year's and how to make it even better."

KTGY received its award at the Awards Gala and dinner on Sunday, September 19th, at South Coast Plaza's Garden Terrace. The winning Canstruction® entries will participate in an international competition during next year's Society of Design Administration (SDA) Convention in Las Vegas.

The public is encouraged to bring canned food items when they visit South Coast Plaza to view the exhibits. Children can receive a free carousel ride with each can donated at South Coast Plaza concierge counter. The structures, which are located throughout both sides of South Coast Plaza, will remain on display through this Sunday, September 26. After the exhibit, the cans that were used to create the various sculptures will be donated to the Orange County Food Bank.

"This is the highest number of team participants that we have had to date and, with the public's help, we hope to break last year's record and collect more than 60,000 cans for the Orange County Food Bank," said Orange County Canstruction® Event Chair Louie Garcia, Associate AIA, with Dougherty + Dougherty Architects LLP.

"Many people do not think Orange County is a place with thousands of struggling individuals," noted Garcia. "With the economic challenges that we have been experiencing over the couple of years, the number of individuals who are food insecure only continues to rise. There are over 500,000 people in Orange County that are considered food insecure."

CANstruction is a design/build competition held in cities throughout North American and Canada. Teams of Architects and Engineers compete to build unique sculptures made entirely out of canned foods. Last year similar CANstruction events were held in 75 cities across North America, those events resulted in over 2.2 million pounds of food being donated to aid in the fight against world hunger.

"Canstruction is an awesome team building exercise and for a great cause," said Senden. "It's nice to work together outside of regular work hours on a project that is fun and gives something back to the community. We all know each other a lot better now than we did when we started this. And, I think we're seeing pink and purple cats in our sleep."

About Canstruction®
Canstruction® is an international community service project by the design and construction industry to benefit local food banks where teams of architects, engineers, designers, contractors and/or those professionals mentoring students, associations or business compete by designing and building structures made entirely out of canned foods. For more information about Canstruction®, see www.canstruction.org or the website for Orange County Canstruction® at www.CanstructionOC.org.