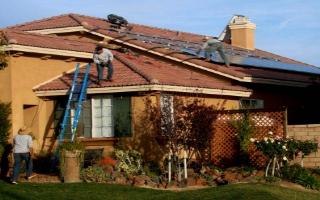 "and the pre-installed option made it an easy choice for us."
Traditionally, solar panels have cost $30,000 for homeowners. With SunRun's solar power service, homeowners at The Preserve can sign up for solar power for $0 down instead of buying a system of their own. This service costs about $42 per month, and will lower their monthly power bills by $50 to $100, depending on the amount of power used. To date, over 90% of The Preserve buyers have elected the SunRun solar power service as part of their home purchase.

"We are excited to have a solar-powered home," said a homebuyer from The Preserve, "and the pre-installed option made it an easy choice for us."

"Our goal for The Preserve is to not only make cost-effective solar power available to more homebuyers than ever before, but also to set a new standard for the home building industry," said Jim Boyd, regional president at Toll Brothers. "Homebuyers have shown overwhelming support for the solar option, and this initiative will save them thousands of dollars over the life of their homes."

SunRun's solar power service makes solar affordable and risk-free for homeowners. SunRun owns, monitors, and maintains the solar equipment so residents can reduce their environmental impact without purchasing, installing, or maintaining the solar systems themselves.

"Homeowners continue to tell us that their main concerns when considering a switch to solar energy are the hassle of maintenance and the upfront costs," said Lynn Jurich, president of SunRun. "Toll Brothers and SunRun are working together to eliminate these barriers for new home buyers, and the unveiling of the homes at The Preserve delivers on the promise of our partnership."

The community will include 90 homes when construction is complete, and SunRun, PetersenDean and Toll Brothers plan to extend the solar option to additional new communities to accelerate the widespread adoption of affordable home solar.

SunRun is the simple and affordable option for homeowners who want to switch to solar electricity. SunRun enables homeowners to go solar for as low as $0 upfront and simply pay monthly for solar power. With over 5,000 customers, SunRun is the nation's leading alternative to utility electricity. SunRun partners with 20 leading local solar installers, who together employ more than 2,500 green-collar workers. SunRun has raised financing for more than $300 million in solar systems from PG&E Corporation and U.S. Bancorp, as well as $85 million in equity capital from Sequoia Capital, Accel Partners, and Foundation Capital.

PetersenDean has designed and installed top-quality roofing and solar systems for residential and commercial customers since 1984, and offers warranties on all products and installations above the roofline. Founded upon the principle that quality roofs are the result of quality workmanship, the company's commitment to safety, quality, and customers has made PetersenDean the roofing company of choice for the country's top homebuilders. Headquartered in Northern California, PetersenDean operates 15 regional offices in Arizona, California, Florida, Nevada, and Texas and has grown to be the largest privately held roofing and solar contractor in the United States

Toll Brothers, Inc. is the nation's leading builder of luxury homes. The Company began business in 1967 and became a public company in 1986. Its common stock is listed on the New York Stock Exchange under the symbol "TOL." Toll Brothers, a Fortune 1000 company, recently received the #1 ranking in FORTUNE Magazine's 2010 World's Most Admired Companies Survey among home building companies, and is honored to have won the three most coveted awards in the home building industry: America's Best Builder, the National Housing Quality Award, and National Builder of the Year.
Source: Toll Brothers