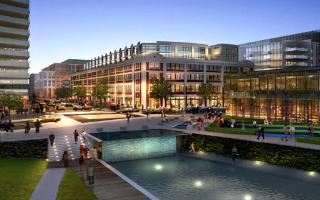 CLEVELAND, OH - Forest City Enterprises, Inc. announced that a subsidiary closed a $46.1 million HUD-insured mortgage loan for Foundry Lofts, a 170-unit, 80/20 multifamily apartment building at The Yards, Forest City's mixed-use project in southeast Washington, D.C. "This financing is an important milestone for The Yards for several reasons," said Charles A. Ratner, Forest City president and chief executive officer. "It is the beginning of active construction on our first building at The Yards. It also demonstrates the strength of the public/private partnership that has persevered through difficult financial and economic conditions. Most important, we believe it marks the start of a new period of economic revitalization and opportunity for this neighborhood and all of southeast D.C."

"Foundry Lofts is also significant for us as a company," Ratner added. "With the exception of the Barclays Center arena in Brooklyn, this is the first new construction we have started in two years. Throughout the recession and into the current recovery, we've consistently stated that we would only start a project when there was a combination of market demand and available financing. The D.C. market has held up very well during the downturn, giving us confidence in the market. The innovative financing behind this project provided the other necessary piece. The project also highlights the significant entitlements we hold in quality markets that enable us to move forward on projects as markets and financing allow."

The 41-year financing, at a 4.66 percent interest rate (before mortgage insurance), was completed through a risk-sharing program between the District of Columbia Housing Finance Agency and the U.S. Department of Housing and Urban Development, and was funded by a total of $47.7 million of New Issue Bond Program (NIBP) bonds. The NIBP program, which was implemented as part of the Housing and Economic Recovery Act of 2008, is designed to help provide market liquidity for bonds that housing finance agencies use to provide financing.

The Yards will also feature a 5.5-acre public park that will be a gathering place and recreational focus for the entire community. Forest City broke ground on the publicly funded park in May 2009. A formal grand-opening ceremony for the completed park is planned for September 7, 2010.

Forest City Enterprises, Inc. is an NYSE-listed national real estate company with $11.5 billion in total assets. The Company is principally engaged in the ownership, development, management and acquisition of commercial and residential real estate and land throughout the United States.
Source: Forest City