Apartments.com Crowns Roommate of the Year 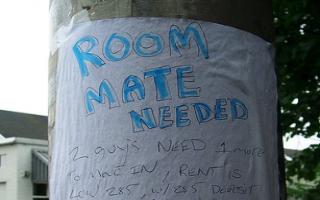 CHICAGO, IL - Apartments.com today announced the grand prize winner in its second annual Roommate of the Year Contest. Receiving entries from across the country, ranging from the realistic to the ridiculous, Andrew Prestler of Kokomo, IN has been named the 2010 Roommate of the Year. Prestler earned the title, as well as the grand prize of free rent for one year plus $10,000 cash by demonstrating he is America's best roommate. Rapping his way through his superior roommate qualities in his short video submission, appropriately entitled Da Best Roommate, Prestler's video took top honors during the public voting stage and exceeded expectations of the Apartments.com judging panel.

"The first time I saw Andrew's video entry when it was posted to the contest site I had a genuine laugh-out-loud reaction that hasn't gone away, even though I've watched the video many times," states Tammy Kotula, public relations and promotions manager, Apartments.com. "It is such a classic parody of a rap video and yet Andrew still manages to touch on all the reasons why he deserves the title Roommate of the Year."

Entering his video in The Grab Bag category, for those roommates who possess special roommate qualities, Prestler's entry illustrates that people can pick their roommates, so why wouldn't they pick someone named Da Best? His rip-roaring rap shows why he is just that. From cooking food that is super delicious—he points out that broccoli and chicken are wicked nutritious—to cleaning spiders from a creepy basement and being chillax, Prestler does and says it all in his original song. Other contest categories included The Purrfect Pet Owner, The Environmentalist and The Loveable Compulsive, among others.

Once Prestler was named one of the nine finalists, the public vote was open and America agreed that he was totally tuned into what it takes to be Roommate of the Year. Prestler claimed top honors from the elite field of finalists when his entry was evaluated with equal weight on originality and creativity, overall "wow" factor, persuasive argument and style and production by the Apartments.com judging panel.

Hailing from Kokomo, IN, Prestler is currently a telecommunications major at Ball State University in Muncie, IN with a concentration in production. This school year, he will be sharing a place with two other lucky students, one of whom is a returning roommate, and both of whom agree that he is definitely Roommate of the Year!

The other four 2010 Roommate of the Year Contest runner-up winners, each of whom received a cash prize of $500, include Hasan Abdullah of Durham, NC who demonstrated his zeal to save the earth as SuperGreenMan; Sean Marin of Los Angeles who roamed the streets of LA singing about his Super Star Roommate status; Ryan Andersen of Scottsdale, AZ who told his roommate tale movie trailer style in The Best Roommate of the Year; and David Krawczyk of Roanoke, VA and Brooklyn, NY who turned his street-side garbage collecting habit into a profit center for himself and his roommates in The Accumulation.