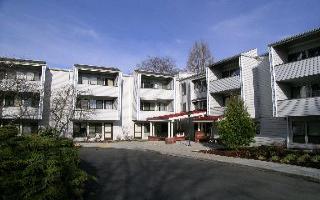 SHORELINE, WA - Work has started on $1.7 million in energy efficiency upgrades and building envelope renovations to Briarwood, a 70-unit public housing complex for seniors and persons with disabilities in Shoreline. The project is being funded under the American Recovery and Reinvestment Act (ARRA), intended to provide or preserve jobs across America. Nationwide, the Obama administration dedicated $4 billion to housing authorities to preserve and improve the country's public housing stock. The project will replace exterior siding, windows, and roofing at Briarwood, which was constructed in 1970. The current building envelope has reached the end of its useful life span, is tremendously energy inefficient, and encourages moisture and mold issues.

"Investments like these create jobs and help get our economy back on track," said Rep. Jay Inslee. "We are not only creating jobs in the construction and building industries, some of the hardest-hit during the economic downturn, but helping seniors and people with disabilities save on their utility bills now and into the future."

"This initiative will not only provide dozens of good paying green jobs for the community, it will also enhance the quality, longevity, energy efficiency, and safety of this public asset," said King County Housing Authority Executive Director Stephen Norman. "When completed we'll see significant energy (and water) savings, as well as related cost-savings, and greenhouse gas emissions reductions."

As the unemployment rate in the Puget Sound region hovers around 8.2 percent, these well-paying jobs will help reinvigorate the local economy. A study by the Econsult Corporation has measured the economic impact of investing in public housing. It showed that every construction dollar generates $2.12 in economic activity through job creation, spending by vendors and suppliers, purchase of goods and services, and consumer spending by workers.

Chris Davies, president of CDK Construction Services, Inc., the general contractor for the building envelope project, agrees. "This recession has caused a severe downturn in the construction sector," Davies said. "In the last year-and-a-half, we shed more than half our workforce — going from a peak of 80 in early 2009 to a low of 34 employees, just two months ago. The three building envelope/energy efficiency projects we're executing on behalf of KCHA have contributed significantly to CDK's ability to hire more workers. We're currently back up to 58 employees and still hiring."

Architectural services are being provided by ORB Architects. The plumbing contractor is United Plumbing, and Alside Supply Center will install the new siding. Accurate Painting is the painting contractor. SQI, Inc. will install the new roof. Carpentry and drywall work on the accessible units will be provided by Westcoast Contracting. Approximately 35 workers from a variety of trades and occupations will be employed on the project. Work is expected to be completed by January 2011.