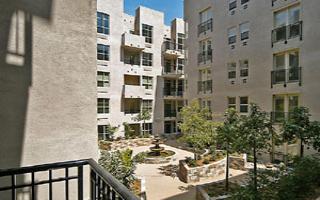 SEATTLE, WA - Security Properties is pleased to announce the $22 million acquisition of Entrada Apartments, a 172-unit complex located in downtown San Diego. The property, which is situated in San Diego's East Village neighborhood, is conveniently located one block from the light rail, the Gas Lamp Restaurant and Shopping District, and a short walk to Petco Park, home of the San Diego Padres. David Dufenhorst, Managing Director at Security Properties, is excited not only to re-enter the San Diego marketplace but to further build upon an institutional equity partner relationship that started in early 2008 with the purchase of a 194-unit project in Bellevue, Washington.

Entrada was built in 2004 and the new owners expect to spend capital renovating the leasing office, improving the dramatic rooftop common area and implementing a vibrant exterior paint scheme. The joint venture capitalized the acquisition by assuming an existing conduit loan and assumed a modified loan from City Center Development Corporation ("CCDC"). CCDC provided the original developer with $3.5 million of equity to construct the complex in exchange for providing 40 affordable units as part of the project.

The performance of the property is expected to improve when the Thomas Jefferson School of Law completes its relocation from its Mission Hills location to a new building one block away from Entrada. The law school, which has an enrollment of 800 students, is planning for growth to 1,000 students in its new facility along with faculty in excess of 200 people. Given Entrada's large mix of studios and one bedrooms and its close proximity to the new law school campus, Dufenhorst believes that its performance will continue to improve after the law school's opening in January 2011.
Source: Security Properties