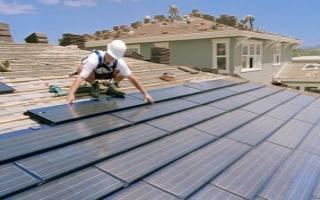 SAN FRANCISCO, CA - SunRun, a leading home solar company, today announced it closed a Series C round of funding for $55 million led by Sequoia Capital and joined by existing investors Accel Partners and Foundation Capital. SunRun is redefining residential electricity by offering homeowners a better alternative to electricity from their traditional utility - easy, affordable home solar. SunRun plans to use the funding to meet increasing demand for its affordable home solar plans, and for expansion into new U.S. markets.

SunRun eliminates the two biggest barriers to mainstream solar adoption – high cost and hassle - by providing homeowners with a clean, affordable alternative to the electricity they receive from their utility. SunRun owns the solar panels for its customers, allowing them to switch to solar electricity for little to no initial cost, and then make a predictable monthly payment for solar power. SunRun customers control the rates that they'll pay for home solar electricity over the next 18 years, allowing them to avoid costly utility rate increases in the future. SunRun takes on the responsibilities of owning solar panels, including full maintenance, monitoring, repairs, insurance and a money-back performance guarantee for every customer.

SunRun's strong customer growth in the past year shows that home solar has finally become a realistic option for homeowners. SunRun's customer base has grown by over 400% in the past year, and the company has over 4,500 satisfied home solar customers across five states – Arizona, California, Colorado, Massachusetts and New Jersey. This funding round follows an announcement by SunRun and PG&E Corporation earlier this month of a $100 million tax equity project financing agreement to fund SunRun's installation of more than 3,500 new home solar installations across the nation.

"Many homeowners are looking for a better alternative to their utility" said Edward Fenster, CEO of SunRun. "SunRun gives them a real choice - clean solar energy that doesn't cost a lot, and gives them control over what they'll be paying in the future. Plus, they don't need to take care of any solar equipment because it's all serviced for them. It's an attractive proposition for a lot of homeowners."

SunRun CEO Edward Fenster and President Lynn Jurich started SunRun as classmates at Stanford's Graduate School of Business in 2007, with the mission of making clean energy a realistic choice for homeowners. SunRun's unique approach to home solar includes partnering with leading solar installers who design and install all of SunRun's systems.

"For cleantech energy to become mainstream, it has to come with both financing and service," said Warren Hogarth, a Partner at Sequoia Capital. "SunRun is the company creating and leading this opportunity for residential solar. Their unique model puts solar within reach of the average American home owner."

SunRun is the largest owner of residential solar in the nation. SunRun makes affordable home solar a reality by providing a superior alternative to traditional utility electricity. With SunRun, homeowners pay little or no cost to switch to home solar, and simply pay monthly for solar electricity, locking in low rates for 18-20 years. SunRun takes on the responsibility of ownership, giving its customers total peace of mind. SunRun has partnered with PG&E Corporation and U.S. Bancorp for project financing and is backed by leading venture capital firms Sequoia Capital, Accel Partners and Foundation Capital.