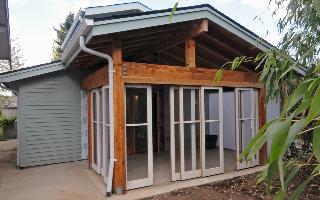 PORTLAND, OR - New changes by the City of Portland just put an Accessory Dwelling Unit (ADU) within reach for almost any homeowner, with system development charges waived and size limits relaxed for three years. Portland remodeling and building contractor Hammer and Hand is poised to maximize this window of opportunity, bringing formidable construction experience, green building expertise, and ready-to-build designs to the development of ADUs.

"Accessory Dwelling Units are a smart investment that brings high built-value and income-generation to homeowners," says Sam Hagerman, President and co-founder of Hammer and Hand. "When built right, they also make beautiful and sustainable additions to residential neighborhoods."

What is an ADU? A separate, compact space – complete with bed, bath, kitchen, and entry – that provides a second dwelling on a residential property. Before WWII, ADUs were a common fixture of American communities because they integrated well into neighborhoods, provided affordable housing options for young and old, and facilitated inter-generational living for families. However, after WWII, national patterns of urban development shifted toward low-density suburban sprawl and ADUs fell out of favor. Decades of urban blight, segregation, car dependence, and loss of greenspace followed.

Communities across the country began advocating for smarter growth in the late 1980's and early 1990's, and Portland became an early leader in the movement to re-allow ADU development. But it was not until March 2010 that the City truly encouraged ADUs by removing onerous regulatory barriers.

Meanwhile, Hammer and Hand has established a 15-year track record as a leader in infill development and is now poised to bring this leadership to ADU development, helping to build a livable future for Portland.

"It's the people that make Portland interesting – young entrepreneurs who bring business to the city and life to the sidewalks", says local realtor Kama Dersham. "ADUs are hip and affordable for these folks and will help keep Portland vibrant and viable."

Support multi-generational living with independent, comfortable living space that allows grandparents to live next to grandkids and older folks to age-in-place.

Help the planet by supporting a compact, walkable and accessible urban form.

"We're passionate about bringing ADUs back as a go-to housing type in the City," says Hagerman. "The last boom in ADU construction was during the Great Depression. Now ADUs can help homeowners and the local economy emerge from the Great Recession, and do so in a sustainable, home-grown way."

For over 15 years, Hammer and Hand has established a solid reputation by helping the people of Portland, Oregon live better in their homes and businesses. Their historically accurate restorations, state-of-the-art remodels, and environmentally responsible building practices – along with their Handyman Services – maintain the aesthetic of eras past while creating the living spaces of the future.
Source: Hammer and Hand