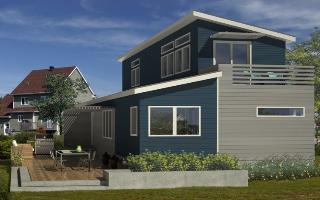 "We also saw a decline in the size of new homes when the economy lapsed into recession in the early 1980s," said NAHB Chief Economist David Crowe. "The decline of the early 1980s turned out to be temporary, but this time the decline is related to phenomena such as an increased share of first-time home buyers, a desire to keep energy costs down, smaller amounts of equity in existing homes to roll into the next home, tighter credit standards and less focus on the investment component of buying a home. Many of these tendencies are likely to persist and continue affecting the new home market for an extended period."

Crowe also pointed out that the average square footage of new single-family homes completed is only one measure of new home size. "The Census Bureau also reports average square footage in a quarterly release based on starts rather than completions, which is sometimes useful when market conditions are changing rapidly," he said.

In 1973, the first year for which the Census Bureau reports characteristics of single-family homes completed, most new single-family homes – 67 percent – had only one story. Twenty-three percent had two or more stories, and 10 percent were split levels.

In 1973, less than half of all new single-family homes completed had air conditioning; in 2009, 88 percent were air conditioned nationwide. Regionally, the proportion ranged from a low of 69 percent in the West to a high of 99 percent in the South. The Northeast and Midwest were at 75 percent and 90 percent, respectively.

Regional differences were especially pronounced in the selection of exterior wall material. Nationwide, 34 percent of all single-family homes completed in 2009 homes had vinyl siding, 23 percent were brick, 19 percent were stucco, and 13 percent had fiber cement siding.