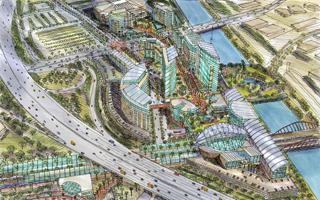 IRVINE, CA - Award-winning KTGY Group, Inc., Architecture and Planning, is pleased to announce that the plans for the Anaheim Regional Transportation Intermodal Center (ARTIC) have received the Southern California Association of Governments' (SCAG) 2010 Compass Blueprint Recognition Award for Sustained Leadership. The award program honors plans and projects throughout Southern California that coordinate land use and transportation initiatives and work toward improving the mobility, livability, prosperity and sustainability in the region. KTGY serves as the Urban Design Advisor to the City of Anaheim and prepared ARTIC's Master Plan and the Mixed-Use District Conceptual Development Guidelines.

ARTIC is envisioned as a world-class transportation hub that will accommodate high-speed rail, California/Nevada maglev trains, Metrolink and Amtrak trains, and various modes of ground transportation. This major transit gateway will connect Orange County to other areas in California, the United States and around the world, and help ease the demand for local and regional airport expansion. The ARTIC Mixed-Use District project combines ARTIC with a vibrant mixed-use activity center on a 15.7-acre site, which is owned and planned jointly by the City of Anaheim and Orange County Transportation Authority (OCTA).

According to Ken Ryan, principal and head of KTGY's community planning and urban design studio, the development intent of the ARTIC Mixed-Use District is to serve as a catalyst for urban development in the project vicinity, connecting existing entertainment/sports venues and commercial development with the planned ARTIC facility while generating opportunities for new development. A mix of land uses that complement and support the ARTIC and the local Platinum Triangle area will be developed on the site. Potential land uses may consist of retail, dining, office, civic, hospitality and residential uses. This public-private partnership project is anticipated to be implemented in multiple phases over the next 20 years.

The panel of eight judges praised the plans for ARTIC because of the state-of-the-art facility that uses innovative, environmental-friendly technologies and the new development opportunities it creates that complement, revitalizes and supports the local economy. The judges also acknowledged not only how ARTIC accommodates multi-modal transportation opportunities, but also applies the fundamentals of great neighborhoods to an urban transit setting, with the intent of responding more deeply to the issues of mobility, affordability, livability, and place in a sustainable attractive environment.This year's Compass Blueprint Recognition Awards Program was held on May 5, 2010, at the La Quinta Resort and Spa in La Quinta, in conjunction with the SCAG Regional Conference and General Assembly. Only 12 Compass Blueprint Recognition Awards in various categories were presented.

ARTIC has also been honored by the Orange County Section of the American Planning Association (APA) with the 2009 Outstanding Planning Award for Focused Issue Planning, which recognizes an unusually high merit report or development plan; and the Gold Nugget Award of Merit for "Outstanding On-The-Boards Site Plan."

ARTIC is situated at the intersection of major freeways and is a short walk from Angel Stadium of Anaheim and Honda Center. Construction is slated to begin next year on the site. For more information about ARTIC, visit the project web site at www.ARTICinfo.com.