Group to Focus on Urban America 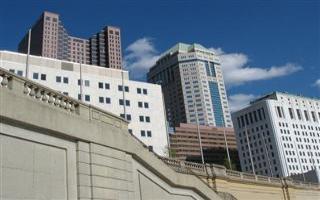 NEW YORK, NY - McCormack Baron Salazar and The Goldman Sachs Urban Investment Group are pleased to announce their strategic partnership and shared vision for the future of rebuilding distressed communities across the country. This partnership combines the vast experience of an urban-inner city developer with a firm known for its financial expertise and commitment to community development. When combined, the strength of these two national firms will have the ability to significantly impact the revitalization of low-to-moderate income urban communities.

McCormack Baron Salazar Chairman and CEO, Richard D. Baron, announced the investment by Goldman Sachs of a minority interest in the nationally recognized development firm. Mr. Baron said, "Building upon the strength and experience of McCormack Baron Salazar's 35 years of development success, Goldman Sachs saw this as an opportunity to expand their focus on investing in urban America. This was a natural progression for both firms to continue their missions."

"We are proud to partner with McCormack Baron Salazar. They are thought-leaders in comprehensive neighborhood development, using innovative approaches to transform previously neglected communities. This partnership is a unique opportunity to expand our commitment to the revitalization of urban neighborhoods on a national scale," said Alicia Glen, Managing Director and head of the Goldman Sachs Urban Investment Group.

McCormack Baron Salazar is a nationally acclaimed leader of affordable urban housing development. Since its inception in 1973, the firm has developed 15,260 units of affordable housing and 1.2 million in retail/commercial square footage in 33 urban markets totaling more than $2.1 billion in development investment. The firm's mission is to rebuild neighborhoods in central cities across the United States that have deteriorated through decades of neglect and disinvestment. McCormack Baron Salazar headquarters are located in St. Louis, Missouri, with satellite offices in Los Angeles, Memphis and Pittsburgh.

Founded in 2000, The Goldman Sachs Urban Investment Group ("UIG") deploys the firm's capital by making investments and loans that benefit low- and moderate-income people and underserved communities. Through its comprehensive community development platform, UIG is a catalyst in the revitalization of distressed urban neighborhoods. UIG is part of The Goldman Sachs Group, Inc.
Source: McCormack Baron Salazar