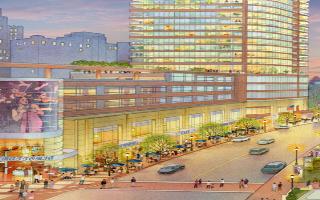 NEWARK, NJ - Dranoff Properties, in conjunction with The New Jersey Performing Arts Center (NJPAC) and the City of Newark, unveiled their plans for the development of One Theater Square. Located adjacent to NJPAC, the 1.2 acre site will become a forty-four story, mixed-use residential building that will claim the title as the tallest building in Newark and bring NJPAC's Theater Square to life as a vibrant live-work-play urban space.

The unveiling of One Theater Square included remarks from Developer Carl Dranoff, NJPAC President and CEO Lawrence P. Goldman, New Jersey's Governor Chris Christie and Newark Mayor Cory A. Booker. The on-stage announcement at NJPAC also revealed renderings of the building. Immediately following the presentation, guests were invited to gather in the Ryan Gallery for a luncheon overlooking the future site of One Theater Square.

In the grand tradition of other arts anchored developments such as the Carnegie Hall Tower, Rose Building at Lincoln Center, and the Museum Tower at MOMA, One Theater Square will expand NJPAC's footprint, leveraging its decade-plus success to reshape downtown Newark into a solid residential environment.

Surrounding Theater Square with private development, including retail, has been in NJPAC's plan since it acquired the land more than two decades ago. The progression in the planning of One Theater Square is being made possible in part due to the efforts of the City of Newark's Economic Development team, including Brick City Development Corporation, and assistance through the Urban Transit Hub Tax Credit Program, an initiative administered by the New Jersey Economic Development Authority and designed to encourage investment and job growth around the State's transit hubs. Under the program, the One Theater Square project was approved for an estimated $38 million over ten years following a rigorous underwriting process by the State of New Jersey. The remainder of the necessary public funding and private sector capital is currently being sought.

One of NJPAC's enduring goals has been to build a community that will make living in downtown Newark attractive to working-class singles, couples and families. One Theater Square will be a true live-work community. The forty-four story building will include over 300 residential units rich with amenities that typify the Dranoff Properties brand, including a grand lobby, 24/7 concierge, a pool and spa, a state-of-the-art fitness center, and secured parking for residents. The Project also features over 20,000 square feet of street-level retail space for restaurants, cafes, shops, and galleries as well as a parking garage. One Theater Square has garnered preliminary approvals from both the City's Central Planning Board and its Landmarks and Historic Preservation Commission.

"The impact of support from the Booker Administration and now The Christie Administration cannot be overstated," said Lawrence P. Goldman, President and CEO, New Jersey Performing Arts Center. "One Theater Square represents the best of what can happen when the public, private and nonprofit sectors work in tandem. This is the fulfillment of a two-decade dream for NJPAC. We've found the right development partner. The public sector is squarely behind us. The economy is rebounding and momentum is on our side."

According to Goldman, a dozen highly qualified, nationally-known developers responded to the RFP for the project, "among the surest signs yet that Newark, under the leadership of Mayor Booker, is on the rise again," he noted.

Dranoff Properties was selected for its impressive history in building and designing cutting edge projects, and for the company's striking success despite the flagging economy. With the construction of Symphony House along Philadelphia's Avenue of the Arts, Carl Dranoff, President of Dranoff Properties, is very familiar in working with performing arts centers, and leveraging arts and culture to create unique urban destinations.

"We were honored to have been chosen by NJPAC and endorsed by the City of Newark for what we believe will be a truly historic project," said Carl Dranoff, "Drawing upon our extensive mixed-use experience using arts and culture as a springboard, One Theater Square will be an overwhelming success, and we can't wait to share our plans with the community."

As announced early last year, the Dranoff-NJPAC project was selected as one of the City of Newark's top economic development priorities following a rigorous evaluation conducted by the Brick City Development Corporation.

"We have great confidence that One Theater Square will become a model of the vibrancy of living downtown in a great American city," said Newark Mayor Cory A. Booker. "Carl Dranoff has brought renewed dynamism to urban communities throughout the region with his attractive, innovative live-work-retail spaces. What Carl, Larry Goldman and Deputy Mayor Stefan Pryor have planned is exciting, emblematic of a Newark on the rise, and has the highest endorsement of my administration."

"It is an exciting time for Newark and terrific to see such an ambitious development project take flight in the city where I was born. This project has the needed support and ingredients for success, and I am confident the City of Newark is ready to continue building on its great attractions," said New Jersey Governor Chris Christie. "My administration is committed to making New Jersey a home for business and job growth through economic development efforts, and the continued revitalization of downtown Newark."

Dranoff Properties was established in 1998 to create unparalleled residential destinations that transform and revitalize the urban core. Led by nationally recognized visionary and urban advocate Carl E. Dranoff, the firm specializes in developing character-defining projects that rejuvenate neighborhoods, cities, and regions. Over the course of ten years, the company has developed a portfolio of award-winning, nationally recognized projects. These projects are livable, walkable, sustainable communities that breathe new life and vitality into the community. The Dranoff portfolio of properties includes the preservation of historic buildings, the adaptive reuse of structures from the industrial past, as well as the ground up development of entire mixed-use communities. Please visit www.dranoffproperties.com for more information.

New Jersey Performing Arts Center (NJPAC), located in downtown Newark, New Jersey, is the sixth largest performing arts center in the United States. As New Jersey's Town Square, NJPAC brings diverse communities together, providing access to all and showcasing the State's and the world's best artists while acting as a leading catalyst in the revitalization of its home city. Through its extensive Arts Education programs, NJPAC is shaping the next generation of artists and arts enthusiasts. NJPAC has attracted over 6 million visitors (more than one million children) since opening its doors in 1997, and nurtures meaningful and lasting relationships with each of its constituents.
Source: New Jersey Performing Arts Center