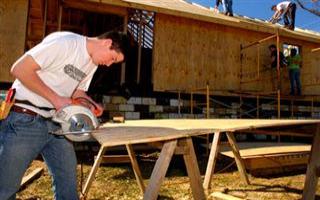 "After an uncertain couple of months, home builders are gradually getting back to what they do best as the spring home buying season commences and consumers return to the market," said Bob Jones, Chairman of the National Association of Home Builders (NAHB) and a home builder from Bloomfield Hills, Mich. "While we still have a long way to go, today's numbers are an indication that builders are looking down the road with a bit more optimism."

"Today's report is very encouraging, because it signifies that home builders are confident enough to begin work on homes that will very likely be completed after the expiration of the home buyer tax credits," noted NAHB Chief Economist David Crowe. "The solid gain in permit issuance last month is particularly welcome news, since those numbers are generally a reliable indicator of future building activity. That said, considerable headwinds continue to impede housing's recovery, including the critical shortage of credit for housing production that is stifling new development in reviving markets."

While single-family starts slipped 0.9 percent in March, this small decline - from an upwardly revised number the previous month - was due entirely to a drop-off in the Midwest from an abnormally high February level; all other regions reported single-family gains in March. Nationwide multifamily starts gained 18.8 percent to a 95,000-unit rate for the month.

The 7.5 percent gain in nationwide building permits reflected a 5.6 percent uptick to 543,000 units on the single-family side and a 15.4 percent gain to a 142,000-unit rate on the multifamily side.