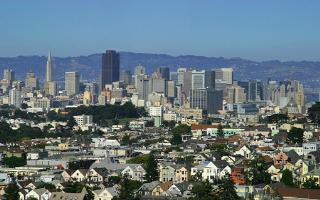 SAN FRANCISCO, CA - Sales activity in San Francisco's housing market rebounded during the second half of 2009 and into early 2010, resulting in a significantly tighter housing market from a year ago, according to the most recent Market Focus report released jointly by the Rosen Consulting Group and the San Francisco Association of REALTORS®. The report states that completed home sales in March 2010 increased 58 percent from the same month a year ago, absorbing much of the excess inventory in the market and intensifying competition among buyers for desirable properties.

In a welcomed development for a city known for the high value of its real estate, the report indicates that the sale of luxury property has gained traction in recent months. The Rosen Consulting Group attributes this development to sentiment among high-end buyers becoming more positive.

The condominium market also gained ground during March with the median sales price rising to $670,000, a 4.9 percent increase from the March 2009. Stimulated by the availability of FHA financing, tax-credits, and attractive pricing/concessions in comparison to recent periods, completed condominium sales reached 206 units in March, a 76 percent increase from the previous year.

The report sounds an optimistic note about housing sales activity in the near-term future by noting that the market's return to supply and demand fundamentals as a result of a decline in the number of foreclosures is likely to drive home price appreciation. California's $200 million home buying tax credit program should continue to incentivize home buying, supplanting the expiring federal tax credit. While mortgage rates are expected to increase in coming months, with the end of the Federal mortgage-backed security purchase program, rising interest rates from private investments should help offset the rise in mortgage rates.
Source: San Francisco Association of REALTORS