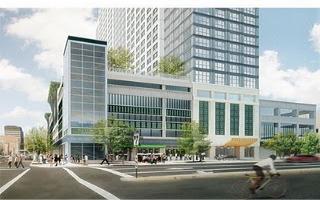 NEW HAVEN, CT - Becker+Becker, a Fairfield-based design and development firm, today announced that residential leasing has begun at 360 State Street, a new 32-story mixed-use tower located in the heart of downtown New Haven. The building has been garnering attention and winning praise as a model for sustainable, environmentally-friendly design.

"With 360 State Street, we have transformed a long-vacant site into the greenest new structure in the state," said Bruce Becker, president of Becker+Becker. "From our use of recycled stone for countertops, to thermostats that know when you're home, to a pool heated with a fuel cell and elevators that recapture their own energy, the building is designed with half the carbon footprint of a conventional apartment building. And the energy savings will be passed onto our tenants through lower utility bills."

360 State Street is the state's first Leadership in Energy and Environmental Design (LEED) Platinum residential project. This "green building" rating system, developed by the US Green Building Council (USGBC), sets standards for the environmentally sustainable design, construction and operation of buildings and neighborhoods. In a letter certifying 360 State Street's designation, S. Richard Fedrizzi, who heads the USGBC, noted that Becker+Becker's work on the project had earned it "a place among the finest developments incorporating the principles of smart growth, urbanism, and green design."

On March 8th, Becker led state and federal officials through 360 State Street in a group headed by U.S. Senator Chris Dodd, who chose the project to promote his Livable Communities Act. The landmark bill will help communities cut traffic congestion, reduce greenhouse gas emissions and gasoline consumption, revitalize Main Streets and urban centers, and create more affordable housing. Accompanied by Deputy HUD Secretary Ron Sims and other officials, Sen. Dodd toured the building, and then spoke at the leasing office across the street.

"Through projects like this one here at 360 State Street," he said, "regions can keep their young people, attract new knowledge workers, put existing residents back to work, and accommodate the baby boomer generation as they enter retirement."

360 State Street comprises 500 apartments atop 22,000 square feet of retail and a four-level public parking structure. Located directly across from the State Street Metro North train station, a half-mile from the Union Station Metro North station - and with a Zipcar sharing program in the parking garage - it is a transit-oriented residential development designed for those eager to have cars handy but minimize their use. New Haven Green is one block to the west, and Yale University, Yale New Haven Hospital and other downtown employers are within easy walking distance - as are hundreds of restaurants, shops, galleries, museums and clubs.

Potential residents concerned about the energy and environmental costs of such luxury need not worry: 360 State Street will be the most eco-friendly mixed-use development in Connecticut.

"We set out to show how people can live large while leaving a smaller energy footprint," explains Bruce Becker. When the building is up and running, Becker notes, it will have one-half the carbon footprint of a comparable code-compliant apartment building in Connecticut. "Senator Dodd's legislation makes clear that only by changing our pattern of development can we find a more environmentally and socially sustainable way to build and to live. From the start this has been the guiding principle of 360 State."

Speaking at the press conference in his leasing office, Becker noted that many Americans are embracing environmental responsibility as the next great national cause. "I see this as patriotic," he summed up. "Green is the new red, white and blue."

The 360 State Street leasing office is currently open at 804 Chapel Street, directly across the street from the building. The community's first residents are expected to move in this summer. For more information, visit www.360statestreet.com.